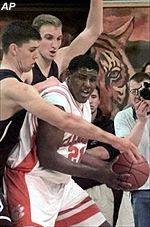 CLEMSON, S.C. (AP) – Chris Carrawell has lived with Duke’s high expectations for years so he wasn’t going to let teammate Shane Battier or the fourth-ranked Blue Devils settle for just a career night.

“How many did he have? Seven?” Carrawell asked. “I told him he should have had 12. He choked.”

“The always loquacious Chris Carrawell, everybody,” answered Battier, who had 26 points.

In the past month, the Blue Devils (23-4, 14-1) lost at home to Maryland and St. John’s. They were without key reserve Mike Dunleavy, who returned from his home in Oregon to Durham, N.C. on Wednesday to continue recovery from mononucleosis. And the Tigers (10-18, 4-11) are playing better than their record.

“We’ve had to live with the expectations for a long time now,” said Carrawell, who scored 19 points. “For us to accomplish all we want, we have to handle them. This was part of it. This gets us ready for the weekend.”

That’s when North Carolina comes to Cameron Indoor Stadium, where Duke hasn’t been its dominating self.

“We’re not the Duke team that we were a few weeks ago,” coach Mike Krzyzewski said. “But we’re still fighting like crazy. If we can keep getting better while Dunleavy’s gone, maybe when he comes back we’ll be a better basketball team.”

If Battier, a junior, and Carrawell, a senior, play like they did at Littlejohn Coliseum, Krzyzewski might not worry so much.

Battier seven 3-pointers broke his career best by one and Carrawell clamped down on ACC leading scorer Will Solomon as the Blue Devils recovered from Saturday’s one-point home loss to No. 18 St. John’s.

Battier was almost perfect from long range in the first half, going 6-of-7, and sent Duke to its eighth straight victory over Clemson.

Solomon, the league’s top scorer at 20.6 points a game, had 26 points, but Carrawell harassed him throughout and he was 10-of-26 from the field.

The Blue Devils have been so dominant the past four seasons – with four consecutive ACC titles – that any slip has some wondering what’s wrong. It happened Feb. 9, when Maryland ended their 31-game ACC winning streak. And it happened again this week as the Red Storm became just the third nonconference team in 130 games to win at Cameron Indoor Stadium.

“When someone starts making shots like that, they get in a zone,” said Solomon, someone who should know.

“I missed a couple early and usually, I would just stop shooting,” said Battier, who finished 7-of-10 from beyond the arc. “But I got a few more open looks and just hit them.”

As hot as Duke was, Clemson was cold. Solomon missed his first five shots and finished the half 3-of-12, continually rushing to shoot.

When the Tigers tried to claw back, getting to 56-46 with 11:39 to go on Edward Scott’s second straight 3, Jason Williams and Battier answered with 3-pointers to restore control.

After baskets by Solomon and Adam Allenspach brought Clemson within 74-66 with 2:44, Carrawell made four free throws and Battier added another.

Williams had 16 points and eight assists.