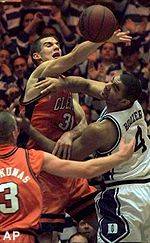 DURHAM, N.C. (AP) – It was apparent from the start of Saturday’s game with Clemson that No. 3 Duke did more during its off week than play in the area’s record 20-inch snow.

Chris Carrawell scored 20 points, Shane Battier had 17 and the Blue Devils bolted to a 42-point halftime lead Saturday en route to a 93-59 victory over the Tigers.

“I thought we were pretty fresh today and as a result we were really able to get out into the passing lanes and play pretty good defense, maybe our best defensive half of the year in the first half,” Battier said. “That was a result of having fresh legs.”

“To be honest with you, I thought their pressure was overwhelming,” Shyatt said.

The Blue Devils (16-2, 7-0 Atlantic Coast Conference) warmed up for their showdown Thursday against arch-rival North Carolina by winning their 45th in a row at Cameron Indoor Stadium.

Duke has won 29 straight regular-season ACC games and 16 in a row overall since a pair of season-opening losses.

Clemson (7-13, 1-6) beat No. 21 N.C. State by 17 points Thursday night, but had no chance against a well-rested Duke team. The Tigers, who drove five hours to Durham on Friday because of poor weather conditions, turned the ball over on 10 of their first 16 possessions.

The Blue Devils, second in the nation in scoring, had not played since beating Wake Forest a week ago.

ACC scoring leader Will Solomon, averaging 20.8 points, was 0-for-7 from the field in the opening 20 minutes but finished with 19 second-half points.

Solomon, hawked by the taller Carrawell most of the day, scored his first points from the foul line early in the second half and got a mock cheer from the Cameron Crazies.

“We just wanted to hold him down,” Duke coach Mike Krzyzewski said of Solomon. “We knew he was going to take a lot of shots. He is a tough kid to guard and our kids did a tough job guarding him.”

The Tigers actually outscored Duke 43-35 in the second half, giving Shyatt something positive to take out of the rout.

“You get a barometer and we got a barometer,” Shyatt said of his team’s effort. “You have challenges and this indeed was another challenge. If you don’t take a stand and plant your feet 40 (points) can be 80. I wanted to make sure we understood that.”

Battier had 10 of Duke’s first 17 points, Jason Williams added 11 of his 17 less than 13 minutes into the game and the Blue Devils were off to the races against the error-prone Tigers.

In the first half alone, the Tigers coughed it up 19 times as Duke had a 24-2 edge on points off turnovers.

“We put the press on the we kept getting easy buckets,” Battier said. “It was key today to show our young guys that that’s what we mean by playing Duke defense.”

The final play of the half was typical of Clemson’s luck on this day. Mike Dunleavy banked in a 40-footer for a 58-16 margin, and the Tigers were well on their way to losing for the 15th time in the last 16 trips to Cameron.

Clemson, a team that has battled injuries all season, lost center Adam Allenspach midway through the first half with a hip injury. The team’s second-leading scorer did not return.