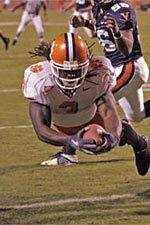 Pearman, who replaced Wali Lundy at tailback in the third quarter, scored on a 2-yard run on the first play of the fourth quarter to make it 23-10, then clinched it with another 2-yarder with 5:14 remaining.

Clemson (1-4, 1-3) lost its fourth in a row since a season-opening overtime victory against Wake Forest. The Tigers drove 80 yards in six plays on their opening drive, but had just seven first downs thereafter.

Playing without defensive end and captain Chris Canty for the first time after he had season-ending surgery, the Cavaliers looked just as dominant as they had in blowout victories in their first four games.

The Tigers also had no answer for Virginia’s running game, getting a reprieve only when Lundy fumbled after running for a first down at the Clemson 5 in the third quarter. Travis Pugh recovered for the Tigers.

Three plays later, the Tigers were forced to punt from their 22, Pearman took over at tailback and the Cavaliers scored on three straight possessions. After trailing 10-3, Virginia scored the last 27 points.

Virginia trailed for only 3:22 of 240 minutes in its first four games, but quickly fell behind 7-0 on Charlie Whitehurst’s 5-yard pass to Duane Coleman. The key play on the six-play drive was Whitehurst’s 56-yard pass to tight end Ben Hall that moved the ball to the Cavaliers’ 6.

The Tigers held the lead until 5:39 before halftime, when Marques Hagans hit Heath Miller from 5 yards out to give Virginia a 13-10 lead. On the drive, Hagans also hit Deyon Williams for 13 yards on third-and-7, then found Miller for 32 yards on a third-and-11 from the Tigers 43.

Whitehurst finished 16-of-28 for 166 yards and threw his 11th interception of the year. Tony Franklin made the pick for Virginia.

The Cavaliers honored Welsh at halftime. He coached at Virginia for 19 seasons and is its leader in career victories with 189. He’ll be inducted into the College Football Hall of Fame in December.