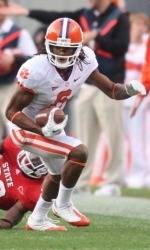 Tigers Fall to NC State On the Road

The win for the Wolfpack ended Clemson’s seven-game winning streak in the series, which dated back to 2004.

“I was really disappointed in the way we played,” Clemson Head Coach Dabo Swinney said. “There are no excuses. They wanted it more than we did. It is that simple.

“In the game of football, when you do the things that we did, you are going to get beat.”

Clemson was led by quarterback Tajh Boyd’s 238 passing yards and two Chandler Catanzaro field goals of 24 and 32 yards. The Tigers also got five catches for 124 yards from DeAndre Hopkins in the loss.

The Tigers were without leading receiver Sammy Watkins, who sat the game out due to a sprained AC joint in his shoulder, while starting left tackle Phillip Price also missed the game due to an MCL sprain in his knee.

Clemson (9-2, 6-2 ACC) got a late two-yard touchdown run from running back Mike Bellamy with 1:22 to play to cap the night’s scoring. His score was set up by a 50-yard Cole Stoudt to Brandon Ford completion down the far sideline.

“I told our team that we are a family,” Swinney said. “Families hurt together, they celebrate together and they grow together. That’s what families do and that’s what this team will do.”

The Wolfpack (6-5, 3-4) were aided in the second quarter by Tiger mistakes. Clemson turned the football over four times and was penalized five times for 42 yards.

“When you play like that, most times you are going to get beat, especially when a team grabs the momentum,” Swinney said. “That’s what happened. They got the momentum and we never got it back.”

Following the Wolfpack’s first touchdown, a Boyd fumble at the Clemson six-yard line set up a Jay Smith seven-yard touchdown pass from Glennon to give State a 14-3 lead with 10:33 left in the first half. On the next possession, Bellamy fumbled at his own 18, which led to a 21-yard field goal by Niklas Sade for a 17-3 advantage.

After forcing a three-and-out, T.J. Graham returned a punt 34 yards to the Clemson 11, and two plays later Tony Creecy scampered four yards off the right side to give the `Pack a 24-3 lead with 4:58 to play in the second quarter.

“Field position was huge,” Swinney said. “They had three straight scores that were at the six-yard line, the 11-yard line and the 18-yard line. That was back-to-back-to-back. We could never get the momentum back our way.”

The Wolfpack added a 32-yard Sade field goal with five seconds left to stretch their lead to 27-3 at the break. Clemson, which led the ACC in scoring and total offense coming in, was held to a season-low 86 yards in the first half.

“We did not get it done today,” Boyd said. “Give NC State credit. They came out with more energy and were fired up. That kind of sums this game up.”

NC State opened up the second half with a third Sade field goal, and then got a 43-yard touchdown pass from Glennon to Tobias Palmer.

Clemson scored first on a 21-yard field goal from Catanzaro after the Tigers went 32 yards in eight plays on their second offensive possession to take a 3-0 lead. NC State then scored 30 unanswered points before Catanzaro’s second field goal, this time from 32 yards, in the third quarter.

The Tigers had a couple of chances to draw closer in the third, but Boyd had one pass intercepted at the one-yard line by cornerback David Amerson and another in the end zone by Brandan Bishop.

“We have had 11 turnovers in our last three games,” Swinney said. “This is not a complicated game. I’m really disappointed in that. We had some costly penalties and we gave up some sacks, too. We really looked like an immature team out there tonight.”

The Tigers will try to regroup for next Saturday, when they visit 14th-ranked South Carolina in Columbia. Kickoff is slated for 7:45 p.m. and the game will be televised by ESPN.

“We have to refocus on our goals,” Swinney said. “We did not just create our goals. They have been hanging on our walls for two-and-half years now and going on three. Every goal is still there and that is what we have to focus on.

“The bottom line for us is refocusing on the goals ahead and that starts with the State Championship this week, and trying to play a better football game than what we did tonight.”