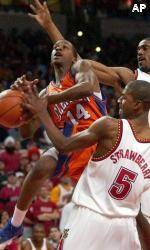 Sharrod Ford continued his outstanding performances on the road against ACC competition, but Maryland’s 52 percent field goal shooting was too much to overtime in the Terps 70-49 victory over Clemson at the Comcast Center on Feb. 24. The victory enhanced Maryland’s NCAA chances, giving the Terps a 14-10 record overall, 5-8 in the ACC. Clemson fell to 10-15 overall, 3-11 in the ACC.

Ford, the only native of Maryland on the Clemson team, had 14 points, six rebounds and four blocked shots to lead the Tigers. He led Clemson in all three areas in his 35 minutes of play. It was the second straight year that Ford had played well in front of the hometown fans, as he had a double-double in the Comcast Center against Maryland his sophomore season. It was the fifth time in seven ACC road games that Ford has scored in double figures. Ford’s four blocked shots gives him 103 for his career, seventh highest in Clemson history.

Field goal percentage and turnovers were keys to the game. Clemson shot just 16-51 from the field, 31.4 percent, Clemson’s low mark of the year. Maryland shot 52 percent from the field on 28-54, the best field goal percentage against Clemson this year. It was the first time in 25 games that an opponent had shot over 50 percent against Clemson all year. The Terps made 61 percent in the second half. Clemson had 22 turnovers that led to 17 Maryland points. Clemson had entered the game with three straight games of 15 or less, its best streak in that category all year.

Maryland had four players in double figures, led by John Gilchrist who had 19 points, six assists and five steals. D.J. Strawberry made his first career start memorable as he was 7-9 from the field and had 15 points. He added three steals and two blocked shots.

Maryland held a 52-36 lead in the second half on a three-point goal by Chris McCray, his only three-point attempt of the night. But, Clemson battled back and cut the margin to 53-44 with 6:19 left on a pair of free throws by Ford. Maryland then went on a 14-0 run to put the game out of reach and claim its 13th straight victory over Clemson.