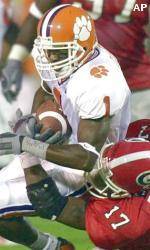 ATHENS, Ga. – D.J. Shockley is doing his best to start a quarterback controversy at Georgia.

Shockley, playing his first college game, ran for one touchdown and passed for another as the eighth-ranked Bulldogs escaped a major upset by rallying for a 31-28 victory over Clemson on Saturday night.

Billy Bennett kicked a 43-yard field goal with 5:19 remaining to snap a 28-all tie in the renewal of a longtime rivalry.

The Bulldogs’ supposedly high-powered offense managed only 203 yards, but Shockley did very well in his three series.

He ran for a 9-yard touchdown in the second quarter and threw a 24-yard scoring pass to Terrence Edwards early in the fourth, tying the game at 28.

Starter David Greene, the Southeastern Conference freshman of the year in 2001, was only 12-of-21 for 67 yards – the worst performance of his career.

“We’re going to see D.J. play more,” coach Mark Richt said. “I like how he handled himself. He wasn’t flustered. He was pretty accurate with his passes.”

Greene, who did throw a 4-yard touchdown pass to Damien Gary, insisted that he wasn’t concerned about giving up more playing time.

Georgia took advantage of atrocious play by Clemson’s special teams. Fred Gibson returned a kickoff 91 yards for a touchdown. Aaron Hunt missed two field goals, including a 46-yard attempt with 1:43 remaining that would have tied the game for the Tigers. A shanked punt and a long punt return set up two more Georgia TDs.

“I have never had that many breakdowns in all my years of coaching,” Clemson coach Tommy Bowden said. “If I had a special teams coach, this would have been his last game.”

The two schools, only about an hour’s drive apart, played for the first time since 1995. Both made a plethora of mistakes, not surprising for a season opener, but there was plenty of drama in the final quarter.

Shockley, a highly touted high school player who redshirted last season, erased a 28-21 deficit with 12;35 remaining. On third-and-3, he stepped up in the pocket and found Edwards over the middle.

Then Gary returned a punt 40 yards to set up Bennett’s winning kick.

During Shockley’s only series of the first half, he sidestepped Clemson safety Eric Meekins with a brilliant move and dove into the end zone on third down.

“I was just playing hard, trying to help the team the best I could,” Shockley said. “Whatever comes out of it comes.”

Clemson likely would have won if not for a bunch of mistakes, many by the special teams.

The Tigers got in position to send the game to overtime, driving to Georgia’s 26 before stalling. Hunt came up a few feet short on the field-goal attempt.

Gibson was barely touched when he returned the kickoff for a touchdown – and the play shouldn’t even have happened. Clemson was forced to re-kick after being called for illegal procedure on its first attempt.

Former Georgia punter Wynn Kopp, now kicking for the Tigers, set up Shockley’s TD run by dropping a snap, then shanking a rushed punt only 17 yards.

Clemson wasted plenty of other chances. Deep in Georgia territory, Willie Simmons failed to spot an open receiver in the end zone and wound up being intercepted by Decory Bryant.

Simmons’ receivers let him down on two other throws. A deep pass hit Airese Curry on the fly at the Georgia 15, but the ball slid off his fingertips. On another long attempt, Derrick Hamilton got free in the end zone, but fumbled away another perfectly thrown pass by Simmons.

“Emotionally, there was a lot going on,” Simmons said. “Those plays are plays those guys will make.”

The Tigers also fumbled six times, losing valuable yards even though they managed to recover all the loose balls.

“The season has not collapsed over one loss,” Bowden said. “I don’t want to sell my team short.”

Simmons did throw a 21-yard touchdown pass to Kevin Youngblood with just eight seconds left in the first half, pulling Clemson to 21-14.