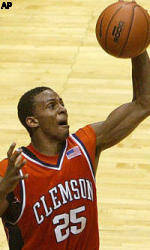 TALLAHASSEE, Fla. (AP) – Olu Babalola hit a go-ahead jumper with just over two minutes remaining and Clemson’s defense made up for a poor shooting night to help the Tigers to a 56-54 win over Florida State on Wednesday night.

The Tigers (10-5, 1-2 Atlantic Coast Conference) snapped a 12-game conference road losing streak, which extended back to a 73-64 victory against Virginia in February 2003. Clemson shot just 35 percent from the field, but took advantage of 22 FSU turnovers.

The Seminoles (9-7, 1-2) failed to hit another field goal following Von Wafer’s 3-pointer with 4:26 to play, getting only two free throws from Alexander Johnson the rest of the way. Florida State committed two costly turnovers in the game’s final 1:49.

The Seminoles’ leading scorer, Wafer, had been FSU’s best long range shooter, but the Clemson defense held him to just 5 points and one 3-pointer on 2-of-8 shooting.

Johnson was the only Florida State player to score in double-figures with a career-high 20 points, but he was limited in the closing stretch after picking up his fourth foul with 6:58 to go.

Clemson led 27-26 at halftime, despite shooting a dismal 28.6 percent from the field. The Seminoles held Clemson without a basket until Vernon Hamilton’s 3-pointer nearly eight minutes into the game.