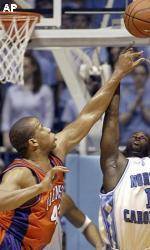 Sharrod Ford scored 14 points on 6-8 shooting and Clemson made 13 of its first 19 shots of the second half, but it was not enough for Clemson in its 69-53 loss at North Carolina on March 2, 2004. Rashad McCants scored 30 points, including eight three-point goals in the Tar Heel’s 50th straight win over the Tigers in Chapel Hill.

Clemson won the battle of the boards, 34-29 and shot 41.2 percent on three-point goals for the game, but a -12 turnover margin was the key to the game. Clemson committed 23 turnovers and forced just 11.

“McCants hit the key shots time and again,” said Clemson head coach Oliver Purnell. “He had a great game, he made eight three-pointers and many of them were contested. He was the difference.”

Ford continued his outstanding play against North Carolina and at the close of the season. The junior center hit 6-8 against the Tar Heels and has now made 23-32 from the field in his career against North Carolina. Ford has now averaged 16 points and nine rebounds per game over his last three games. He is Clemson’s top scorer with an 11.9 average and top rebounder with a 7.1 figure.

This game showed the importance of defense and no turning the ball over in Clemson’s season. The Tigers shot 5-20 to open the game, yet held a 13-8 lead 11 minutes into the contest. Clemson made 13-18 shots over the first 15 minutes of the second half, yet was -6 on the scoreboard during that time against the Tar Heels.

North Carolina opened an eight point lead at halftime 26-18. A three-point goal from 24 feet out by McCants to close the half gave North Carolina momentum going into intermission.

After scoring just 44 combined points in the first half, the two teams combined for 78 in the second half. As stated previously, Clemson shot the ball well in the second half, hitting 14-27 overall, including 5-9 on three-point goals. North Carolina took a 14-point lead at 34-20 with 17:14 left on a dunk by Felton. But, Clemson refused to give up and went on a 14-6 run to cut the lead to six at 40-34 on a three-point goal by Robinson.

North Carolina kept the lead at 10-14 points for the next eight minutes before gaining the 16-point victory. A highlight of the closing seconds was a three-point goal by walk-on senior Beau Shay, the first three-point goal of his four-year career.