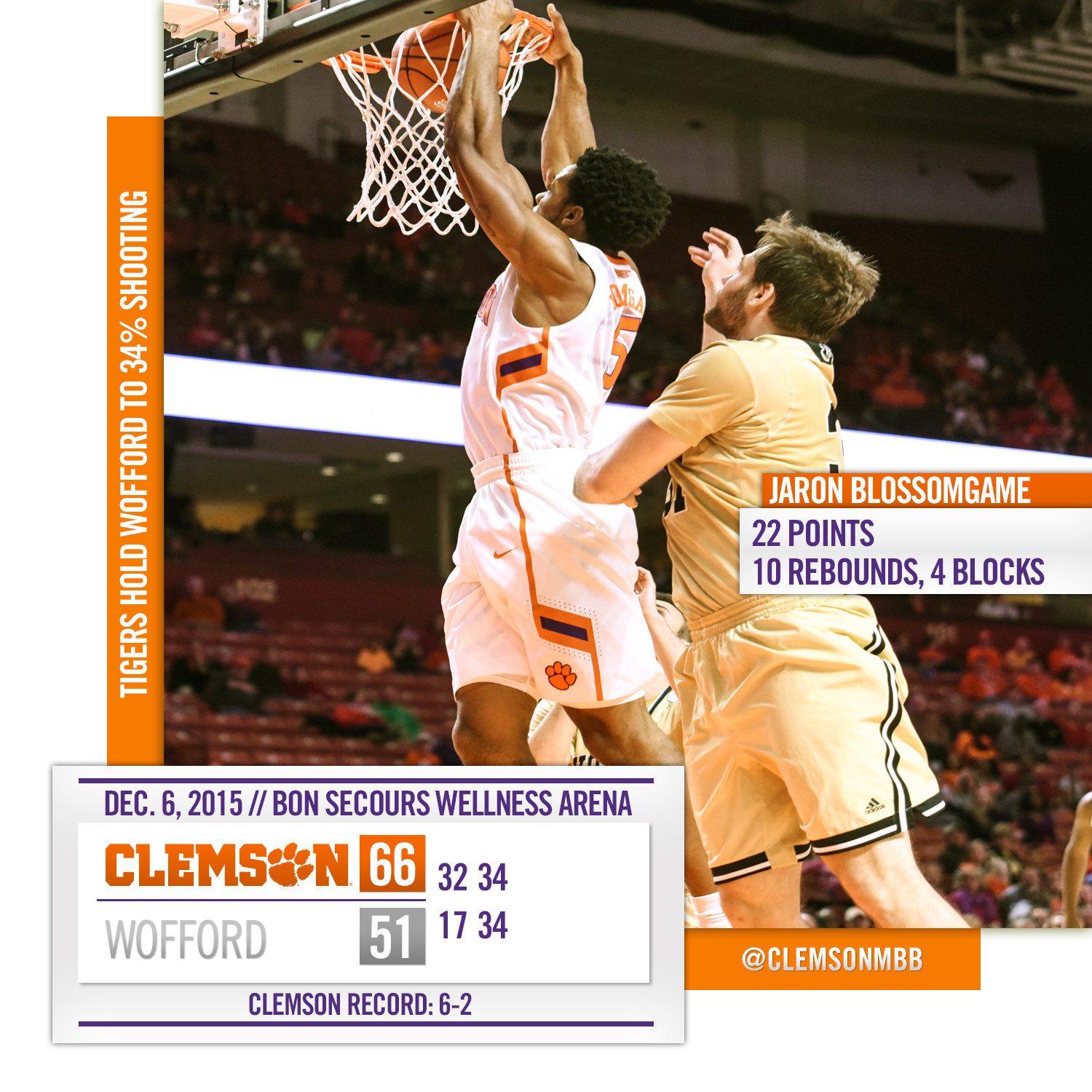 GREENVILLE, S.C. — Clemson took home a 66-51 victory over Wofford on Sunday afternoon at Bons Secours Wellness Arena. With the win, the Tigers moved to 6-2 on the season. The Terriers fell to 3-5 overall.

“We felt a little pressure with soccer and football winning this weekend, so we knew we had to get a win to keep everybody smiling,” joked head coach Brad Brownell. “What a weekend for Clemson Athletics!”

Jaron Blossomgame led the charge by putting up a third of the Tigers’ total points (22). He notched his first double-double of the season with 11 rebounds, while adding a career-high four blocks against the Terriers. Donte Grantham added 11 points and eight rebounds, while Avry Holmes notched 10 in the scoring column.

Clemson jumped to an early lead pulling ahead 20-2 before Wofford could find any rhythm. The defense put up its best showing of this young season, forcing the Terriers to shoot just 27 percent overall in the first half. The Tigers held Wofford’s leading scorer without a point in the opening half, as Blossomgame held Gordon to 0-3 shooting. Gordon did not score until he made a tough driving attempt at the 6:24 mark of the second half.

The second half of play had both offenses slowing to a crawl, with neither team finding any success around the basket for most of the frame. Wofford cut the lead to seven on a couple of occasions, but each time the Tigers found an answer. Blossomgame lit up the glass, dunking three of his seven field goals. He had a late breakaway jam that served as icing on the cake Sunday. Landry Nnoko also had a pivotal second half of play, making two big baskets with Wofford making a run midway through the period. Nnoko had eight points after playing just five minutes due to first-half foul trouble.

The Tigers break for final exams of the fall semester, before returning to action Sunday, December 13 against Alabama. Tipoff will be at 6 p.m. from Bon Secours Wellness Arena.