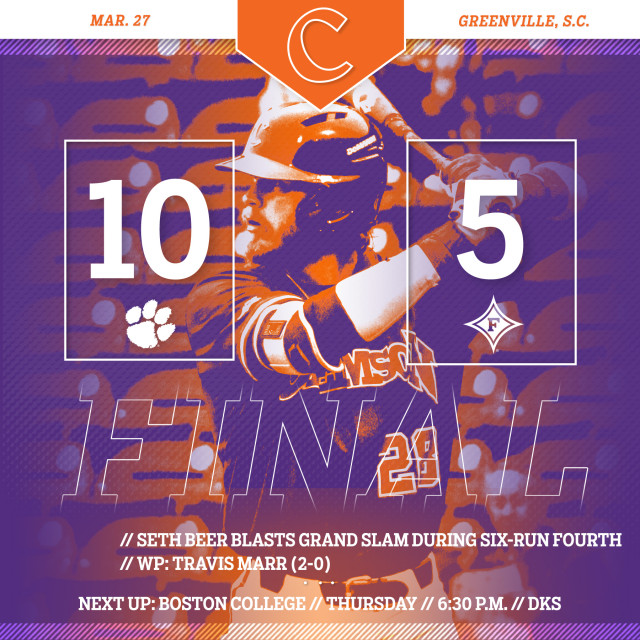 GREENVILLE, S.C. – Seth Beer went 3-for-3 with a grand slam and five RBIs to lead No. 8 Clemson to a 10-5 victory over Furman at Fluor Field on Tuesday night. The Tigers, who won both games of the home-and-home season series, improved to 19-6, while the Paladins fell to 13-12. It was also Clemson’s 19th straight win over Furman, and the Tigers improved to 12-0 against the Paladins at Fluor Field.

Clemson, who won its ninth game in a row at Fluor Field, jumped out to an 8-0 lead thanks to single runs in the second and third innings, then exploded for six runs on just two hits in the fourth inning. After a two-out error, Beer belted a grand slam, his seventh long ball of the year, to cap the scoring. It was his fifth career grand slam and second at Fluor Field. The Paladins responded with three runs in the fifth inning and two runs in the sixth inning, but Clemson escaped further damage by getting out of a no-out, bases-loaded jam with an 8-5 lead. Chris Williams then crushed a two-run homer, his sixth long ball of the year, in the seventh inning.

Tiger reliever Travis Marr (2-0) earned the win, as he allowed only one hit, no runs and no walks with three strikeouts in 2.0 innings pitched. Furman starter Trent Alley (2-2) suffered the loss.