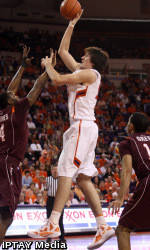 Tigers Down Hokies on Senior Night, 58-56

CLEMSON, SC – Clemson won its eighth straight Senior Night game on Thursday as the Tigers overcame an early 10-point deficit to rally to a 58-56 victory over Virginia Tech in front of 8,735 fans at Littlejohn Coliseum. Senior guard Tanner Smith made two free throws with 2:41 to play to give Clemson the two-point advantage, and the Tiger defense held Tech scoreless over that final stretch to secure the victory. The Tigers moved to 16-13 overall, 8-7 in the ACC with the win. The loss dropped Virginia Tech to 15-15, 4-11 in conference play.

Smith was Clemson’s leading scorer with 14 points, and the Alpharetta, GA native also chipped in with six rebounds and four assists in a fine all-around effort. Fellow senior Andre Young was also in double figures with 10 points, while junior Devin Booker scored 11 points off the bench. Milton Jennings had a game-high 12 rebounds as the Tigers out-rebounded the Hokies 36-30.

Clemson did not make a three-point basket for the first time since the Furman game of 2009-10, a stretch of 84 games. The Tigers shot 44 percent from the field, despite being 0-for-10 from three-point range, compared to the Hokies’ 43 percent. Conversely, Virginia Tech was hot from behind the arc with an 8-for-16 clip on threes. Jarell Eddie led Virginia Tech with 15 points, while Cadarian Raines added 12.

Shortly after honoring the four Tiger seniors in pregame, Smith brought a raucous Littlejohn crowd to its feet with a steal and a fastbreak jam. However, he was called for a technical foul on the play. Virginia Tech put together an 11-0 run to take control early at 16-6 with 14:16 left in the contest. Clemson slowly began to chip away at the lead, drawing to within three at 20-17 on a layup by freshman Devin Coleman.

Clemson pulled ahead for the first time at 28-24 after an 11-0 run of its own, punctuated with a Catalin Baciu layup with 3:47 remaining. The Tigers took a 33-31 lead into halftime after Coleman made a baseline drive and dunk as time expired.

Tech moved ahead 36-33 two minutes into the second half, but went cold from the field over the next eight minutes as Clemson took a 47-39 lead. The Hokies’ only basket during that stretch was a three from Eddie off an offensive rebound as the shot clock expired. After three Virginia Tech long-range goals, the Hokies were within one at 51-50.

The Hokies tied the game twice in the final four minutes before Smith was fouled on a baseline drive. He made both, and the Tiger defense held strong in the final 2:41 as Virginia Tech missed three field goals and two free throws that iced the win for Clemson. Raines was fouled with 2.2 seconds to go in the game, but both free throws missed and Smith grabbed the clinching rebound.