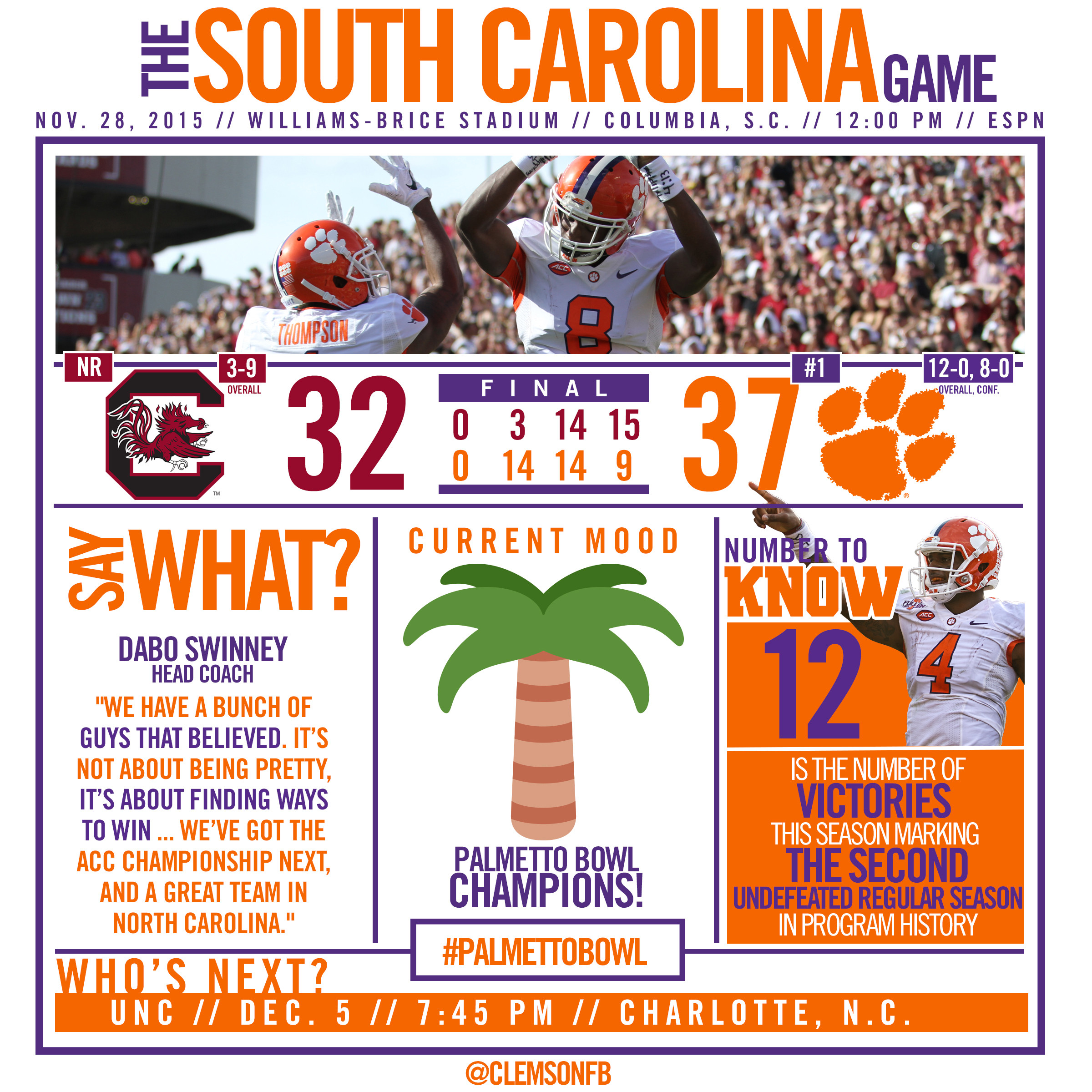 COLUMBIA, S.C. — A sluggish start gave way to a flurry of points in Clemson’s 37-32 win at South Carolina, with Deshaun Watson completing 20-of-27 passes for 279 yards and rushing for a career-high 114.

With the victory, the Tigers remain unbeaten at 12-0, one of only two undefeated teams in the Football Bowl Subdivision, heading into next weekend’s ACC Championship Game in Charlotte.

Watson was responsible for four of Clemson’s five touchdowns as he rushed for three scores and threw for one more. Fellow sophomore Wayne Gallman added 102 yards on the ground and freshman Deon Cain caught five passes for 96 yards and a 55-yard touchdown.

After a scoreless first-quarter by both offenses, Clemson scored first midway through the second period when Watson capped an eight-play, 83-yard march with a five-yard touchdown plunge. The Tiger defense forced a quick three-and-out and Watson followed with a 55-yard strike to Cain to extend the lead to 14-0. South Carolina drove 11-plays for 76 yards as the half closed, but the Tiger defense forced a 21-yard field goal and Clemson led 14-3 at intermission.

Watson led the offense to scoring drives on its first two possessions of the second half as Clemson claimed a 28-10 lead. But the Gamecocks closed the lead to only three points early in the fourth quarter by capitalizing on the Tigers’ third lost fumble of the day. Shon Carson scored from one yard out and Lorenzo Nunez added a two-point conversion to make the score 28-25.

With momentum clearly residing on the home team sideline, Watson led a 10-play, 60-yard drive and finished it off with his third rushing touchdown of the day to extend the lead to 34-25. The Tiger defense then forced its fourth three-and-out of the day, and Clemson held the ball for 4:38 on the ensuing possession. Clemson tacked on a late field goal and South Carolina scored a touchdown with one second remaining.

The Tigers now face North Carolina in the ACC Championship Game in Charlotte, N.C. Kickoff is set for 8 p.m., on Saturday, December 5 at Bank of America Stadium, and will be televised by ABC.