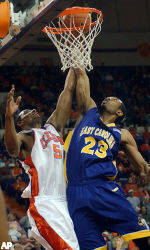 CLEMSON, S.C. (AP) – Sharrod Ford and Shawan Robinson each scored 14 points to lead Clemson to a 74-40 victory over East Carolina on Wednesday night.

East Carolina answered with a 12-2 run that cut Clemson’s lead to 50-34 with 11:53 remaining. The Pirates scored seven points from the free throw line during the run.

But the Tigers put the game away with 15-2 run. Vernon Hamilton had two baskets and an assist off the backboard to Olu Babalola for a dunk during the run. Akin Akingbala’s field goal capped the run to give the Tigers a 65-36 lead with 4:27 left. Akingbala and Cheyenne Moore added 10 points apiece.

East Carolina (4-7) was led by Mike Cook with a game-high 18 points. Cook was the lone Pirate in double figures.

Clemson’s man-to-man defense limited East Carolina to 21 percent from the field in the first half. The Pirates made just seven field goals in the opening half and Clemson led 32-23 at the break.

The Tigers used a 14-2 run in a five-minute span to take a 16-4 lead with 13:18 left in the half. Robinson and Cliff Hammonds both made 3-pointers during the run.

The Pirates scored just six points in the first 12 minutes. After Tom Hammonds made a field goal at the 16:42 mark, the Pirates made just one of their next 15 shots and had four turnovers.