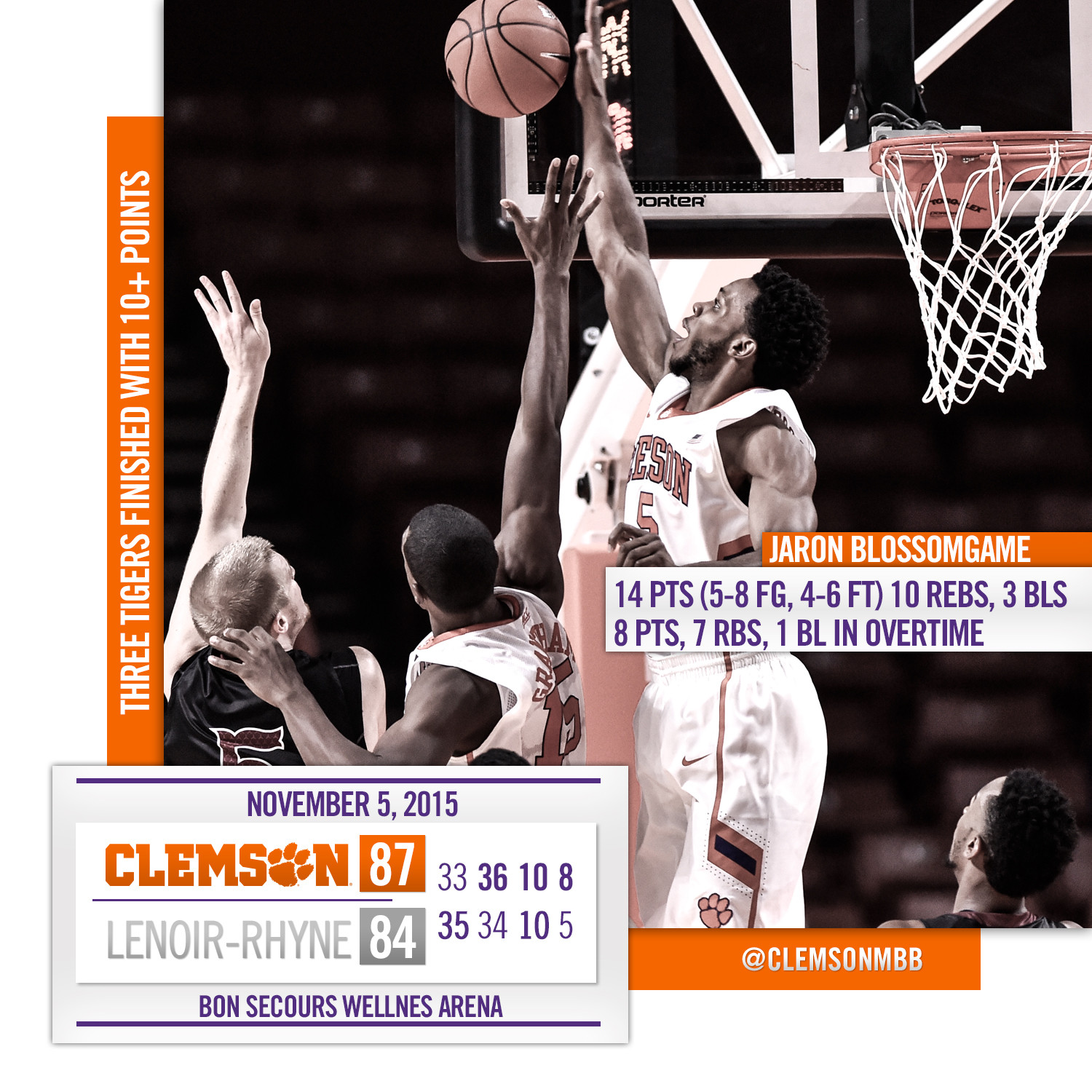 GREENVILLE, S.C. — The men’s basketball team took on the Lenoir-Rhyne Bears at Bon Secours Wellness Arena in its only public exhibition Thursday night. Clemson rallied from a 12-point deficit late in the second half to force overtime and eventually won after two extra periods, 87-84.

“I am proud of our guys for finding a way to win the game,” said head coach Brad Brownell. “We had to battle through a couple of things and made a few big plays late, which helped us win this game. We never got into a good rhythm in the game. We have got to do better with our shooting and our offensive flow in the future.”

The standout player of the night was sophomore forward Donte Grantham, who tallied 27 points — including 16 of the 33 the Tigers put up in the first half of play. The Tigers played most of the first half without a pair of starters, junior Jaron Blossomgame (foul trouble) and senior Landry Nnoko (shoulder). Both players returned and were a force on the glass, with Nnoko pulling down a game-high 15 rebounds. Blossomgame added a double-double with 14 points — eight of which came in overtime — and 10 rebounds.

After trailing by two at intermission, the Tigers scored a quick seven points in the first two minutes of play. But Lenoir-Rhyne took control of the game, leading by as much as 12. With 5:38 to go in the second half, the Tigers went on a 7-0 to inch closer and cut into the Bears’ cushion.

With 1:27 left in regulation, Jordan Roper ignited the team with a dunk, and new point guard Avry Holmes brought the crowd to its feet when he tied the game at 69 on a nifty three-point play with 33 seconds remaining. The Tigers forced a turnover, but Holmes’ three at the buzzer rimmed out to send the game into overtime.

After one extra period was not enough, Roper made a field goal and Grantham followed with a free throw to put the Tigers up by the final margin. Roper finished as Clemson’s No. 2 scorer, pouring in 23 points.

The Tigers return to Bon Secours Wellness Arena to officially open the regular season on Friday, November 13 against North Carolina Central. The Tigers and Eagles tip off at 7 p.m. Tickets are available by calling 1-800-CLEMSON or by visiting ClemsonTigers.com.