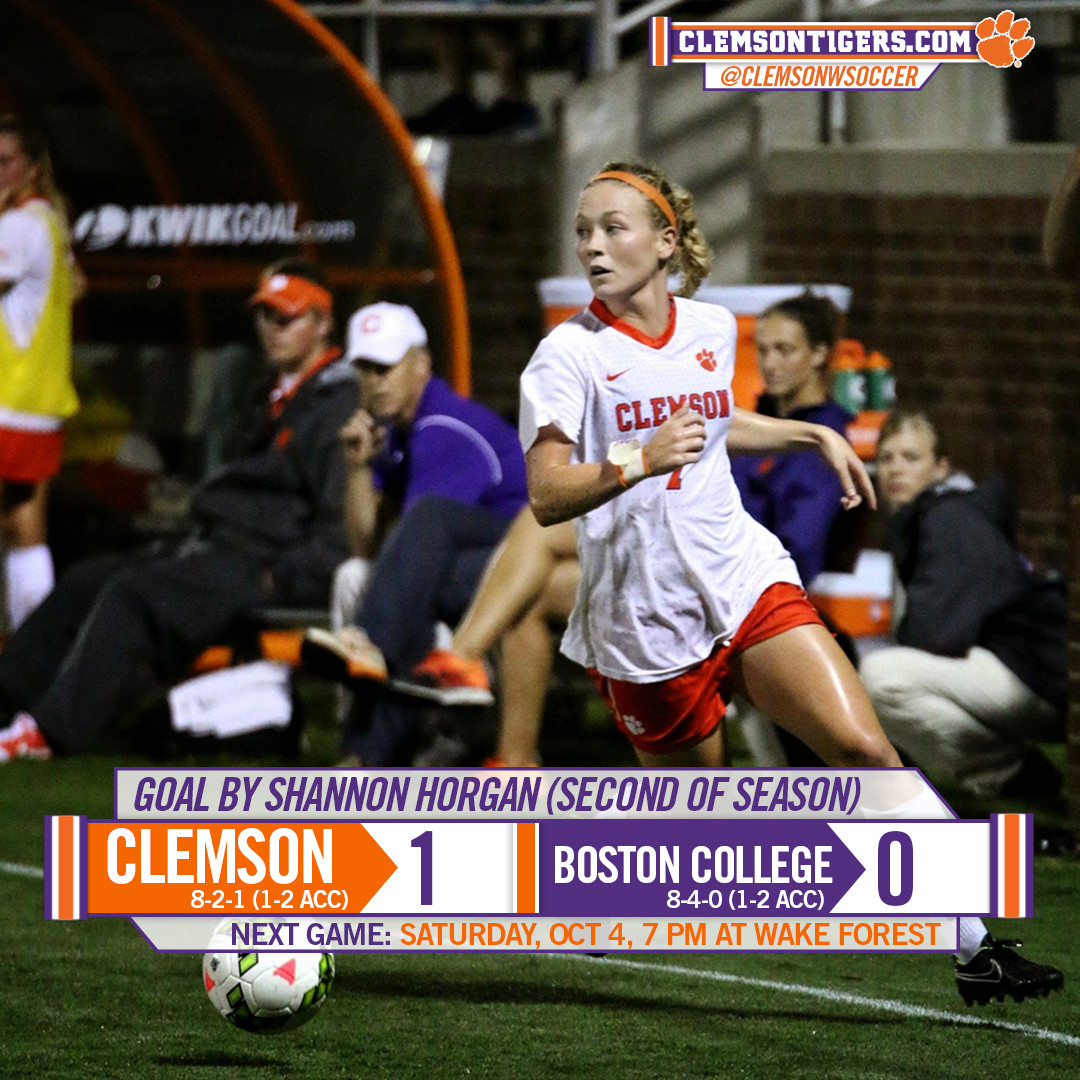 WALTHAM, Mass. – The 16th-ranked Clemson women’s soccer team defeated ACC foe Boston College 1-0 on Sunday morning in a game played on the campus of Brandeis University in Waltham, Mass.  The Tigers notched their first conference win of the season, improving to 8-2-1 overall and 1-2 in league play, while the Eagles fell to 8-4-0 (1-2 ACC).

After a scoreless first half, freshman forward Shannon Horgan scored 11 minutes into the second half to give the Tigers the 1-0 lead, which proved to be enough for the victory. Sophomore defender Gabby Byorth sent a pass to Allie Kington. The junior midfielder delivered a cross into the box, which Horgan headed into the net for the second goal of her Clemson career.

“This was a very good performance,” said Head Coach Eddie Radwanski. “To adapt to the change in circumstances and keep our focus, and to dominate the game on the road against a good Boston College team was very good on our part. It’s great to get a win on the road in the ACC and it was a well-deserved victory.

“We talked to the team about being patient during the buildup and that the goal would come, and it paid off. Gabby passed it to Allie who delivered a great service, and then Shannon had a beautiful header to finish it.

“I also want to compliment my staff,” added Radwanski. “Their ability to adapt to the changes and get the team ready to play today had a significant impact on this win.”

Clemson dominated the game offensively, outshooting the Eagles 14-5. The Tigers took five corner kicks to Boston College’s four. Kailen Sheridan posted two saves in goal and recorded the solo shutout, her third of the season. Sheridan and the Clemson back line held the Eagles’ Hayley Dowd and Stephanie McCaffrey, the top-two scorers in the ACC entering today’s game with 19 and 18 points, respectively, scoreless.

The Tigers return to action Saturday, Oct. 4, when they take on Wake Forest in Winston-Salem at 7 p.m.