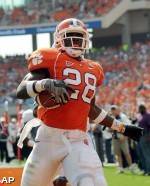 CLEMSON, S.C. (AP)–C.J. Spiller ran for three touchdowns and Clemson took its first steps back from last week’s loss to Alabama with a 45-17 victory over Citadel on Saturday.

The Tigers (1-1) started the season ranked ninth in the county, but were thoroughly embarrassed, 34-10, by the Crimson Tide on national TV. Spiller and backfield partner James Davis accounted for only 20 yards a week ago, while the Tigers finished with zero yards on the ground.

In front of a wait-and-see crowd, the Atlantic Coast Conference favorites found their stride early on against the Championship Subdivision opponent.

It was a difficult week for the Tigers and coach Tommy Bowden. There were few areas Clemson looked good in last week’s Alabama slammer, and Bowden was criticized at almost every turn.

Bowden was taken to task for giving prize freshman Jamie Harper the season’s first carry–he fumbled and Alabama got a field goal–with stars Davis and Harper on the sidelines.

Then Bowden was ripped for calling Crimson Tide coach Nick Saban this past Monday for advice.

Saban’s tips must have helped since there was little to grouse about in this one.

Davis gained 24 yards on the Tigers first play. He started Clemson’s scoring with his powerful 38-yard romp. Spiller kept the pressure on the next series, outrunning Citadel defenders for a 37-yard score.

When Spiller burst through for a TD on Clemson’s next drive, the Tigers were up 21-0.

Quarterback Cullen Harper, who struggled like everyone else against Alabama, looked more like the ACC’s leader in pass efficiency. He completed 14-of-18 for 192 yards, coming out for good in the third quarter after lofting a 26-yard touchdown pass to tight end Michael Palmer.

Safety Michael Hamlin tied a Clemson record with three interceptions and the Tigers held Citadel, which averaged better than 191 yards on the ground last season, to 42 yards rushing through three quarters and 89 for the game.

Clemson established itself on the ground early, gaining 176 yards by halftime. Davis had 97 of those and Spiller 58.

Hamlin became the fifth Tiger with three picks in a game, and the first since Alex Ardley in 2000.

It wasn’t a total loss for the Bulldogs.

They came in hoping to break a two-game shutout streak at Death Valley, and did much more than that. Their point total was the most against Clemson in 22 games since Citadel’s 20-0 victory in 1924.

Andre Roberts had a 41-yard touchdown catch to start things off. Roberts finished with nine catches for 153 yards.

Still, the Bulldogs lost their 19th straight to a Bowl Subdivision team since beating Army in 1992.