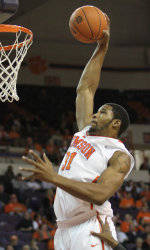 It was Clemson’s (6-4) second consecutive win heading into the Christmas holiday, which the team will spend in Honolulu, HI at the Hawaiian Airlines Diamond Head Classic.

The Tigers used offensive balance and defensive pressure to pick up the victory, much as they did in Saturday’s 60-40 win over Winthrop. Booker was 3-of-7 from the floor, but he nailed seven of his eight free throw attempts and grabbed eight rebounds to lead the Tigers in both categories. Jennings made all four of his field goal attempts and was a perfect 4-for-4 from the foul line. Clemson shot exactly fifty percent (24-48) for the game.

The two forwards led a solid effort for the Tigers inside. They outrebounded the Hornets 40-27 and brought down 12 offensive boards. The Tigers were also able to attack the rim and get to the foul line, where they converted 18-of-25 free throw attempts.

“We had a nice offensive performance,” Head Coach Brad Brownell said. “We had good stats, except a few too many turnovers. We attempted one or two threes that were a little quick, but in games like this, that’s probably to be expected.”

Once again, the Tigers were able to hold an opponent to a low field goal percentage, as the Hornets shot just 32.7 percent (17-52) from the floor. Kenderek Washington was the team’s leading scorer with 10 points, and Tramaine Butler and Stephawn Brown added nine apiece.

Clemson began the game on a 12-3 run that lasted more than eight minutes as both teams struggled to make baskets. Alabama State missed its first five shot attempts and connected on just one of its first 13 shots as the Tigers built the lead. Back-to-back three-pointers by Washington trimmed the Clemson lead to five at 14-9, but the Tigers then scored five straight points to extend the lead to double digits.

After Booker hit a pair of free throws with 4:23 remaining to give the Tigers a 29-19 advantage, the lead never dipped into single digits again. Clemson closed the first half with a 9-2 run that was punctuated by a Booker slam dunk that made it a 36-21 score.

After a travel period, the Tigers will return to action in Honolulu on Thursday, December 22 against UTEP. Tipoff is scheduled for 2:30 PM (9:30 AM local), and the game will be televised on ESPNU.