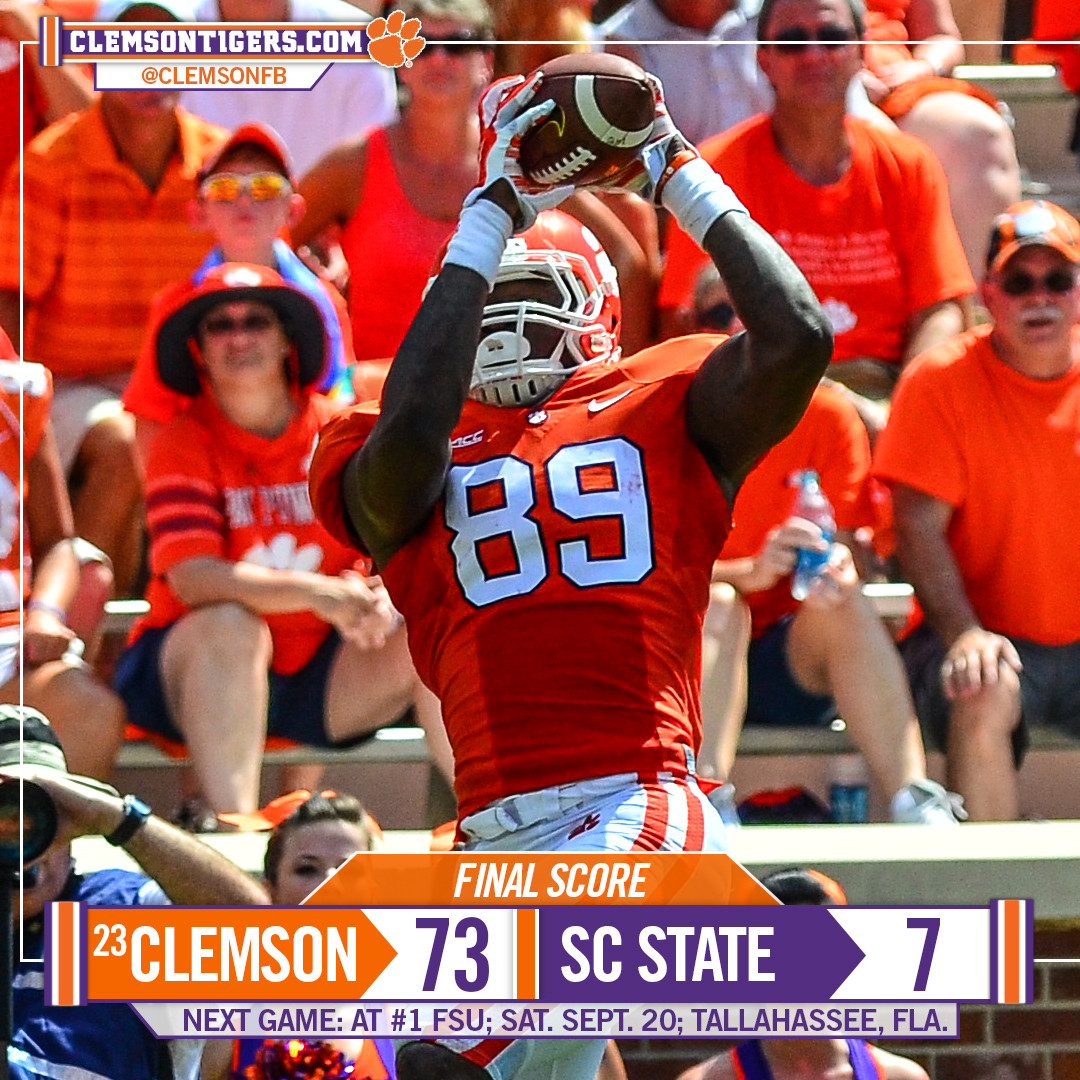 CLEMSON, S.C. – In the home opener, the No. 23 Clemson Tigers faced another type of Bulldog in SC State, looking to bounce back from last week’s game in Athens, and the Tigers didn’t disappoint, cruising to a 73-7 victory.

“This was a great win and I’m proud of our team today,” said Head Coach Dabo Swinney. “We had to respond after last week and I think we did, and that’s what matters. The coaches, the support staff and the players – everyone put forth the effort we needed today.”

On offense, Clemson moved the ball effectively, finishing with 268 rushing yards and 467 passing yards. Both quarterbacks had efficient games, as Cole Stoudt finished the day with 302 passing yards and a touchdown along with a passer rating of 163.4. In his first game in Death Valley, Deshaun Watson finished with 154 passing yards, three touchdowns and a passer rating of 342.6. Watson’s first game in Death Valley was all he could really ask for.

“It was great,” said Watson. “Seeing all the orange in the stands and all the fans and Clemson Family support, and then running down the Hill with all my brothers for the first time was a great experience.”

In regard to Watson’s performance against SC State, Offensive Coordinator Chad Morris liked what he saw out of the offense today and praised Watson’s progress and poise on the field, while also highlighting the Tigers still have two good quarterbacks to work with.

“You’ve got a great competition going on, and Cole is our starter, but that’s a pleasure to have right now. We obviously know where Deshaun is, and he is the future down the road in years to come, but we’re excited about Cole as well.”

The performances by other freshmen did not go unnoticed, as fans saw plenty of potential from more than just Watson. Wide Receiver Artavis Scott finished the day with six receptions for 164 yards and two touchdowns, passing both Aaron Kelly and Sammy Watkins in single-game receiving yards as a freshman. The previous record was set by Kelly against Temple in 2006 and Watkins in 2011 against Auburn.

“It’s a good accomplishment for me,” said Scott. “I’m excited and I was blessed and thankful for it, but I know we have to handle more things than that.”

Scott also stated that the offense’s performance today will be good momentum heading into the bye week before hitting the road to Tallahassee against Florida State.

“It’s going to keep building our momentum, practice is going to be high intensity like we’ve been doing and when this game comes it’s going to be a big week for us, and we’re going to be ready when it comes. Coming back out, we don’t want to get complacent. We want to keep doing the same thing we’re doing, just moving the ball and keeping them on their heels and moving forward and building and building.”

The Tigers got the job done in the running game as well as the passing game. Wayne Gallman led all rushers for the Tigers with 10 carries for 77 yards. Gallman made the most of his opportunites and didn’t let his chance get away from him.

“I had a lot of fun today, and I think it was just the beginning of something new,” stated Gallman. “I think we have a whole lot more in store. The offensive line did a great job getting their blocks today.”

Gallman was not the only freshman back to see his first extended game action. Adam Choice also logged plenty of snaps on the day, finishing with 12 carries for 74 yards and a touchdown, the first of his Tiger career, while averaging 6.2 yards per carry. He also added two catches for 15 yards.

“We gave it our all and everything opened up,” said Choice about the Tigers’ success in the running game. “The offensive line did a great job for us and everything was there, so I believe if we work like that, good things will happen.”

With the win, Swinney and the team’s focus turns to the No. 1 Florida State Seminoles, and Swinney will not sit on this victory for too long.

“This was an excellent win for our program, but we have bigger fish to fry,” admitted Swinney. “We’ll regroup here for the next week, a bye week, but then we’ve got the opportunity to play the No. 1 team in the nation. It’ll be a challenge, but we’re looking forward to it. I’m excited for that opportunity.”