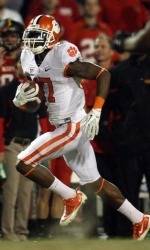 COLLEGE PARK, MD – Even though they trailed by 18 points with 11:56 to play in the third quarter Saturday night at Capital One Field in College Park, MD, the eighth-ranked Clemson Tigers never thought they were going to lose. And when freshman cornerback Bashaud Breeland intercepted a pass by Maryland quarterback Chris Brown and returned it 29 yards to the Maryland 15, they believed it even more.

“I thought it was the spark,” Clemson Head Coach Dabo Swinney said. “That is kind of what I told the team. “`We need a spark somewhere, and we are going to get it.’ Breeland’s pick was the spark.”

Breeland’s spark set up a 13-yard touchdown pass from Tajh Boyd to Sammy Watkins to pull the Tigers within 11 points, and from that point on Clemson outscored the Terrapins by 29 points in rallying to a 56-45 victory. The wild comeback, which featured four different Tigers scoring touchdowns, was the second best in school history, bested only by the 1992 team’s 28-point rally at Virginia.

“Our guys have a ton of heart and character, and I thought that showed up tonight,” Swinney said. “I have talked about the leadership on this football team over and over again, and tonight it really showed up big time.”

It showed up when most thought it was over. But, Clemson never wavered in its approach, even when a muffed punt by Sammy Watkins at his own nine-yard line and a 46-yard interception return by the Terps’ Cameron Chism gave Maryland an early 14-3 lead.

“We were not playing very well, and that is the bottom line,” Clemson offensive tackle Landon Walker said.

But, Clemson kept fighting as Andre Ellington scored on a three-yard run and DeAndre Hopkins caught a six-yard touchdown from Boyd to keep Clemson within striking distance at 28-17. The Tigers kept believing, even when Maryland took the opening drive of the third quarter and got a quick touchdown thanks to a 22-yard pass from Brown to tight end Matt Furstenburg; and despite a three-and-out on their first possession of the second half.

“We put ourselves in a hole early with those turnovers, but the guys came back and persevered,” Boyd said.

Boyd was one of those guys, as he completed 11 of his last 12 passes, while throwing for 270 yards and four touchdowns after Chism’s interception return. Boyd finished the night 26-of-38 with two touchdown passes to Watkins, one to Hopkins and one to Jaron Brown.

“I came out sluggish,” he said. “I can’t really explain it at all. It is kind of one of those things where you have to dig down internally and find out what you’re really made of. I’m glad the guys stuck beside me.”

The Tigers also stuck with their running game as they rushed for 306 yards on 42 carries, with Ellington leading the way with a career-high 212 yards and two touchdowns, including a 44-yard run with 3:55 to play to seal the win.

“Up front, those guys did a good job,” he said. “(The offensive line) took ownership during the week. We got after it this week. Coach (Swinney) said he expected us to have a great rushing game and we took it and went with it and we tried to make the best of it.”

Watkins made the best of his first-quarter fumble and turned in a night of the ages at Clemson. The true freshman broke C.J. Spiller’s all-purpose yards record for a game with 345 yards, while also scoring three touchdowns, including an 89-yard kickoff return that gave Clemson the lead, 49-45, after Maryland had reclaimed it midway through the fourth quarter.

He also had a 70-yard kickoff return in the first quarter that set up Ellington’s first touchdown.

“I’m just glad to see the guy is human because he made a couple of boneheaded mistakes out there,” Swinney said. “He made some mistakes tonight where he actually looked like a freshman. It was kind of good to see to be honest with you.

“The guy was clutch, though. He did not panic. He came back over here. I told him he owed me one and that he will get another opportunity. He more than made up for the one mistake. He is just a special player.”

And Saturday’s win was a special victory.