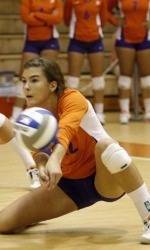 Tigers Come Back for Five-Set Win over NC State

CLEMSON, SC – The Clemson volleyball team had their backs against the wall, trailing 20-17 in the fourth set on the verge of a third straight loss to NC State on Saturday afternoon. But Clemson (11-5, 3-2 ACC) rattled off eight straight points to take the fourth set, and force a deciding fifth, which they won in dramatic fashion, 19-17, to send the Wolfpack (14-3, 2-2 ACC) to their third defeat of the season.

“Being in this situation for the third time is tough,” said Jolene Hoover, who won her 389 career match at Clemson. “I just kept telling them to fight, and they just kept battling. We felt like a lot of their success would be from the middle. We kept trying to focus on the middle and kept trying to defend it and disrupt their rhythm.”

Junior Serenat Yaz had 22 kills and 19 digs to lead the Tigers to a win in their third straight five-set match. The Tigers came out on the wrong end on each of the previous two. This time, however, it was Clemson’s defense and balanced offense that delivered the final blow to keep a 27-match win streak alive over the Wolfpack.

Defensively the Tigers had 16.0 blocks and held the Pack to .146 hitting, and just three aces.

By many accounts, the Tigers were dead to rights, trailing 20-17 in the fourth set, down 2-1 in the match. But Alexa Rand found the floor three times and had a key block during an 8-0 run to force a fifth set. Hannah Brenner distributed the ball well during the run, finding three different players for emphatic kills.

Brenner played well, recording 40 assists in 98 set attempts, a .408 assist rate, and 14 digs for her second straight double-double. Yaz pounded 22 kills in a career-high 57 swings from the outside, while hitting .281. Freshman Kristin Faust had 15 kills, a career-high tying 17 digs, and three blocks. Mo Simmons also came up big, tying a career-best with 14 kills and eight blocks, many of them with Rand.

Rand, who entered the match leading the ACC in hitting percentage had a slow day offensively, but had a huge day with 11 blocks defensively. She now had 29 blocks in the last three matches, upping her average on the season to 1.42 per set. She also moved in 9th on the all-time blocking list with the effort.

Defensively, Clemson passed successfully for much of the match, and allowed just three aces in 97 opportunities. Natalie Patzin and Faust were both perfect, a combined 48-for-48. Many of the Tigers stepped up as two-time All-ACC selection Sandra Adeleye was held at bay for just seven kills on 33 attacks.

The fifth set was back and forth. Clemson looked to take control early with a 7-3 lead. With a 13-10 lead, the Wolfpack tied it up at 13-13 after three straight kills. Rand and Simmons then combined on a block to set up the first match point. The teams sided out on eight straight points to set up a 17-17 score. Yaz then converted for her 22nd kill and a Nicole Glass error clinched it for the Tigers.

Clemson returns to action next weekend in Clemson as they play host to Boston College and Maryland on Oct. 7 and Oct. 8.