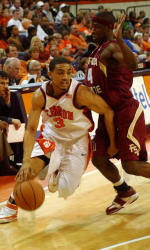 CLEMSON, S.C. (AP) — Clemson made 10 of 16 free throw attempts in the final seven and a half minutes to hang on to beat Florida State 61-55 in the conference opener for both teams Wednesday night.

Clemson, 12-2 overall and 1-0 in the ACC, snapped a two-game losing streak. The loss drops Florida State to 9-2, 0-1 and ends the Seminoles’ seven-game winning streak.

The Tigers scored just five field goals in the second half, one in the final 13:30, but still managed to pull out its fourth victory in its last five games against Florida State.

Clemson shot just 22 percent from the field in the second half (5-23) and finished the game at 36 percent.

Florida State was led by Al Thorton with 12 points and Alexander Johnson with 11.

The Tigers opened the second half by increasing their six-point halftime lead to double digits at 41-30 with 18:45 left.

An inside basket by Thornton got Florida State to within two 53-51 with 2:55 left, but the Seminoles would get no closer.

Florida State, trailing 33-22 at the 2:18 mark, outscored Clemson 8-3 in the final two minutes to cut the Tigers’ halftime lead to 36-30. The Tigers aided the late Seminole run with three turnovers in their final four possessions.

Mathis closed the half with a 3-point basket at the horn to increase Clemson’s lead to six points.

The Tigers made seven 3-point goals in the first half, three by Mathis and two by Rivers.

Florida State shot 56 percent in the first half but was 0-for-1 from behind the arc and just 2-for-7 from the free throw line.