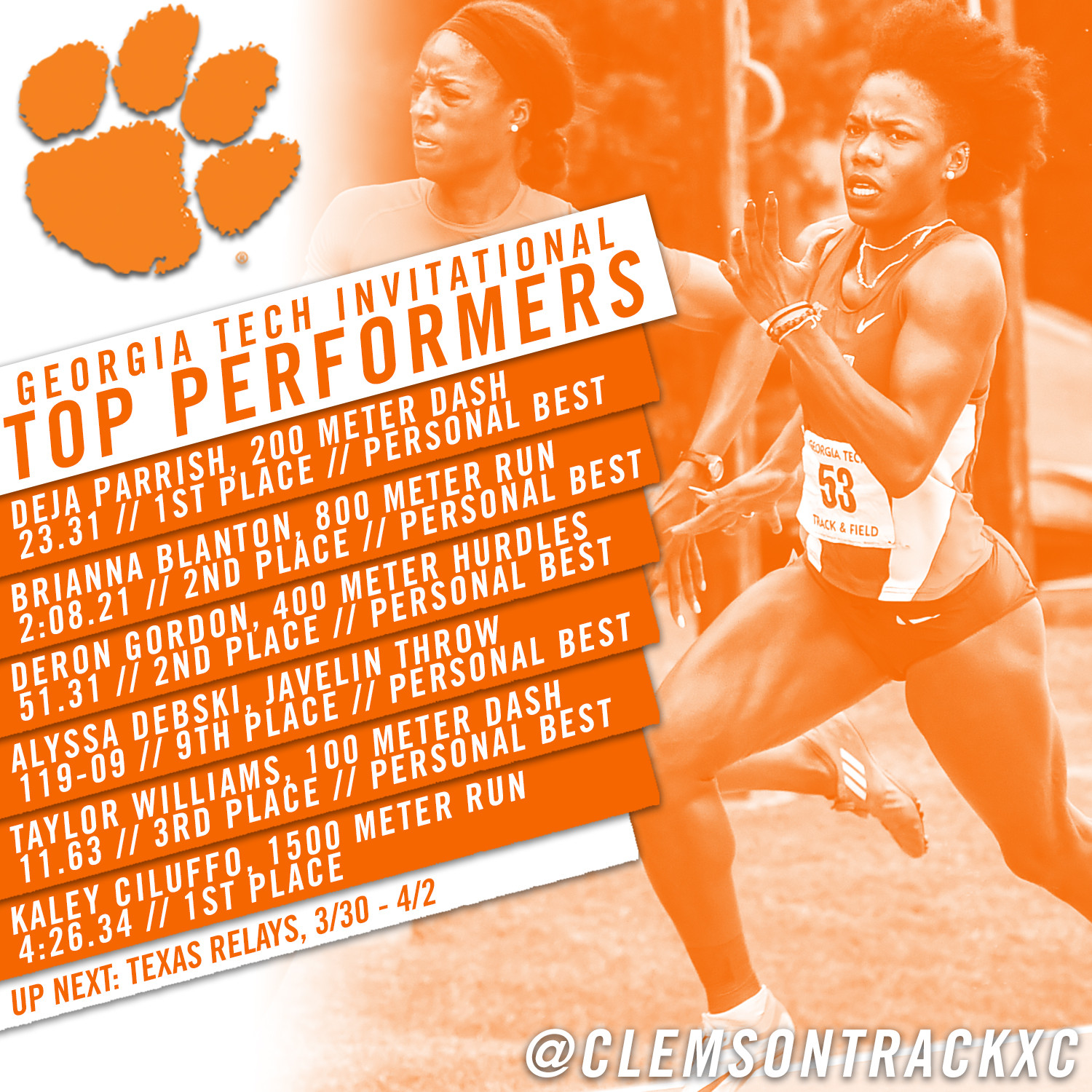 Tigers Bring Their Best To Georgia

ATLANTA, Ga. – Clemson turned in an impressive effort this weekend at the Georgia Tech Invitational with its effort highlighted by 17 personal best performances and three marks worthy of the Clemson record book. The Tigers overall placed in the top eight in 34 events and won four of them.

Kaley Ciluffo was one of the Tigers to come out on top, winning the women’s 1500 meter run in 4:26.34 as a first-timer in the event. James Quattlebaum ran the same race for the men in 3:54.49 to take fifth place in his first time running the event as well.

Ciluffo also placed sixth in the 800 meter run at 2:11.13 behind Brianna Blanton who was one of three Tigers to shake up the program’s outdoor record book this weekend. Blanton ran a personal best 2:08.21, placing her sixth in Clemson history and second overall in the race. Imani McGowan and Evie Tate also ran personal bests in the event as McGowan clocked in at 2:12.20 and Tate finished in 2:29.48.

The other two performances worthy of the record book came from freshmen, Alyssa Debski and Deron Gordon. Debski threw the 10th best mark in program history when she launches the javelin a personal best 119-9.

Gordon ran the 400 meter hurdles in 51.31 to claim the ninth fastest time in Clemson history and take second place in the event. Jorel Bellafonte followed Gordon in seventh, completing the event in a personal best 53.24. In the women’s 400 meter hurdles, Markeeta Thomas was impressive again, taking fourth with a 59.66. Torie Robinson trailed her with a personal best 1:01.08.

Deja Parrish ran a personal best 23.31 in the 200 meter dash to defeat 50 other competitors and take first in the race. One of which being teammate, Ranee Ricketts who ran a 24.10 to take fifth place in the event. The duo assisted in the 4×100 meter relay as well, teaming up with Taylor Williams and Sabria Hadley for a second place effort at 45.13. Williams and Hadley also ran the 100 meter dash, taking third and fourth place respectively with times of 11.63 and 11.73. Williams’ time was a personal best.

Tevin Hester followed up, outperforming 42 other competitors with the 200 meter dash’s fastest time of 20.60. Walter Pate later ran a personal best 23.63 in the event.

Lamb, Cheeks, Bellafonte and Jeffrey Green later combined to win the 4×400 meter relay in 3:06.18. Green led the way in the 400 meter dash, taking second for the Tigers at 46.12. John Lewis trailed in eighth with a personal best 48.44 and Dareyus Person also clocked in with a personal best 48.84. Olivia James and Tanisha Coppin each placed in the top eight of the women’s 400 meter dash. James took fifth at 54.63 and Coppin placed eighth with a time of 55.40.

James and Coppin ran the first two legs of the 4×400 meter relay and set Thomas and Parrish up for success as they placed second overall, finishing the relay in 3:35.49.

Ahrens threw the javelin 186-03 to take fourth place in the event while Borriello threw the hammer 164-5 to take eighth place. Voeks placed fifth in the discus with his personal best 149-0. Javarus Mickle took seventh with a mark of 146-3. Jordan Pickerel walked away fourth in the shot put with a distance of 47-10 and took seventh in the hammer throw with a mark distancing 173-0.

Kamara leaped a personal best 22-8.5 in the long jump to take eighth place. Anasterasia Terrell and Iana Amsterdam placed second and third respectively in the triple jump with leaps totaling 41-3 and 41-1.

Mimi Land had the second best height in the high jump at 5-7.25 while Quanterious Caldwell had the men’s eighth best height of the meet with a mark of 6-6.75. Harrison Hix took third in the pole vault, posting a height of 15-8.25.

One of the most prestigious meets in all of track and field awaits the Tigers next weekend as Clemson will head to Austin, Texas for the Texas Relays. The meet is set to take place from March 30 through April 2.