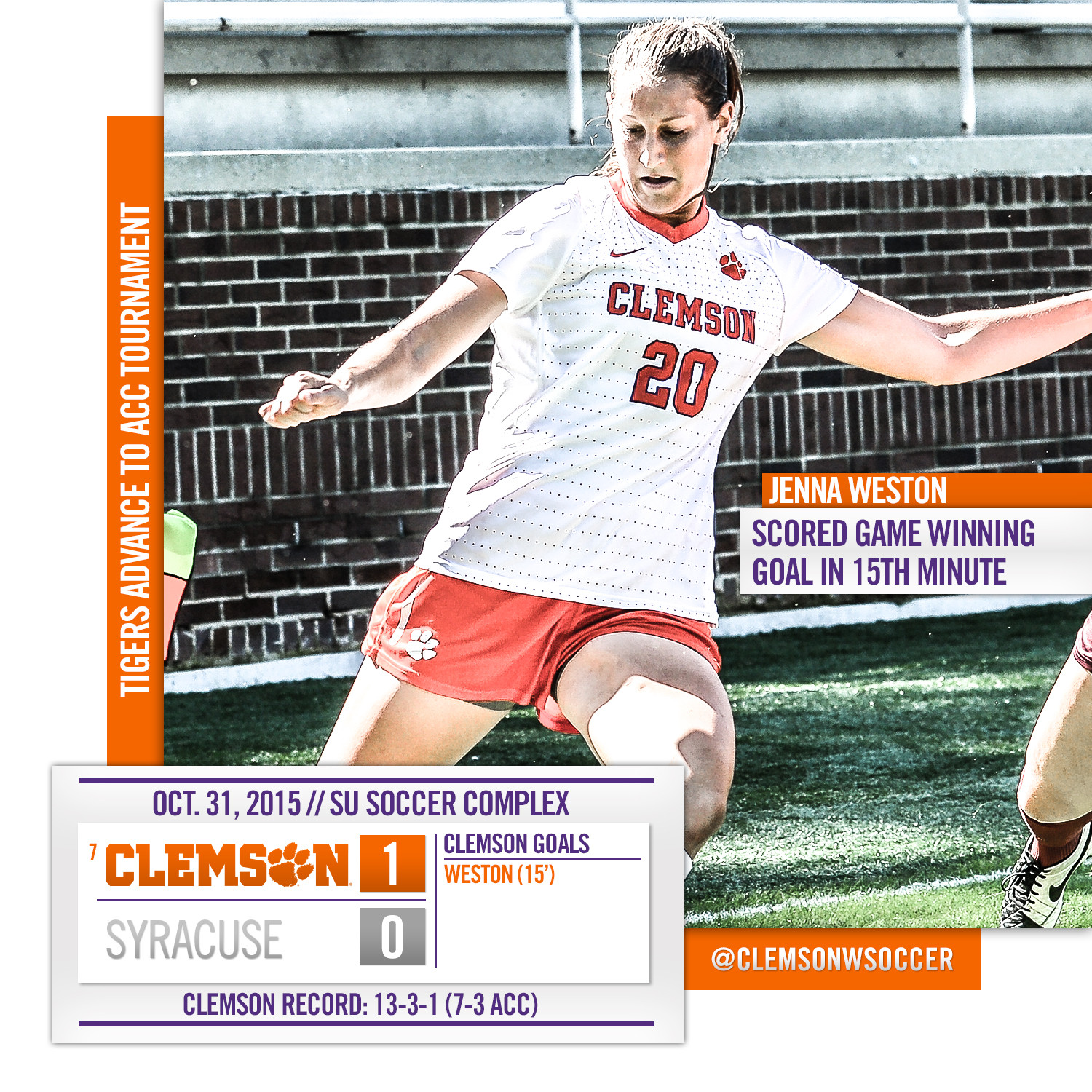 The game was scoreless until the 14:03 mark when Samantha Staab took a free kick from just past midfield. The long service from Staab sailed into the box and Weston was able to head it past the Syracuse keeper to put the Tigers on the board and give them a 1-0 lead. The assist was Staab’s seventh of the year, most on the team in 2015.

Head Coach Eddie Radwanski thought this year’s performance has been a step in the right direction for the program.

“It was a big win today, and the team finishing with seven wins in the ACC and qualifying for the ACC Tournament is a wonderful compliment for these young ladies. The turn around of this program is a testament to the work the players have put in and also a testament to the, often unnoticed, work of the amazing staff I get to work with, Jeff Robbins, Siri Mullinix, Julie Davis Carlson and Manuel Garcia-Oronoz.

“This is a good moment for the program. Making the conference tournament is one of the most difficult things to do, considering that we play in the toughest conference and only four teams make the tournament.”

After the goal just 15 minutes in, Clemson played defense the remainder of the contest and junior goalkeeper Kailen Sheridan kept a clean sheet for her sixth shut-out of the season and 21st of her career.

The 21 career shutouts for Sheridan move her into second place all-time in career shutouts, tied with Ashley Phillips who played in goal for the Tigers from 2004 to 2007.

“Having Kailen in goal is fantastic and I have said before she is one of the best keepers in the country,” noted Radwanski. “When we recruited her we were hoping she would be setting records for us, and she deserves this type of recognition.”

With the win, Clemson clinched a spot in the ACC Tournament for the first time since 2007. The tournament will be played in Cary, N.C. with the semifinal matches being played on Nov. 6 and the final on Nov. 8. Clemson will know its opponent and game time after the completion of ACC regular season play on Sunday, Nov. 1.