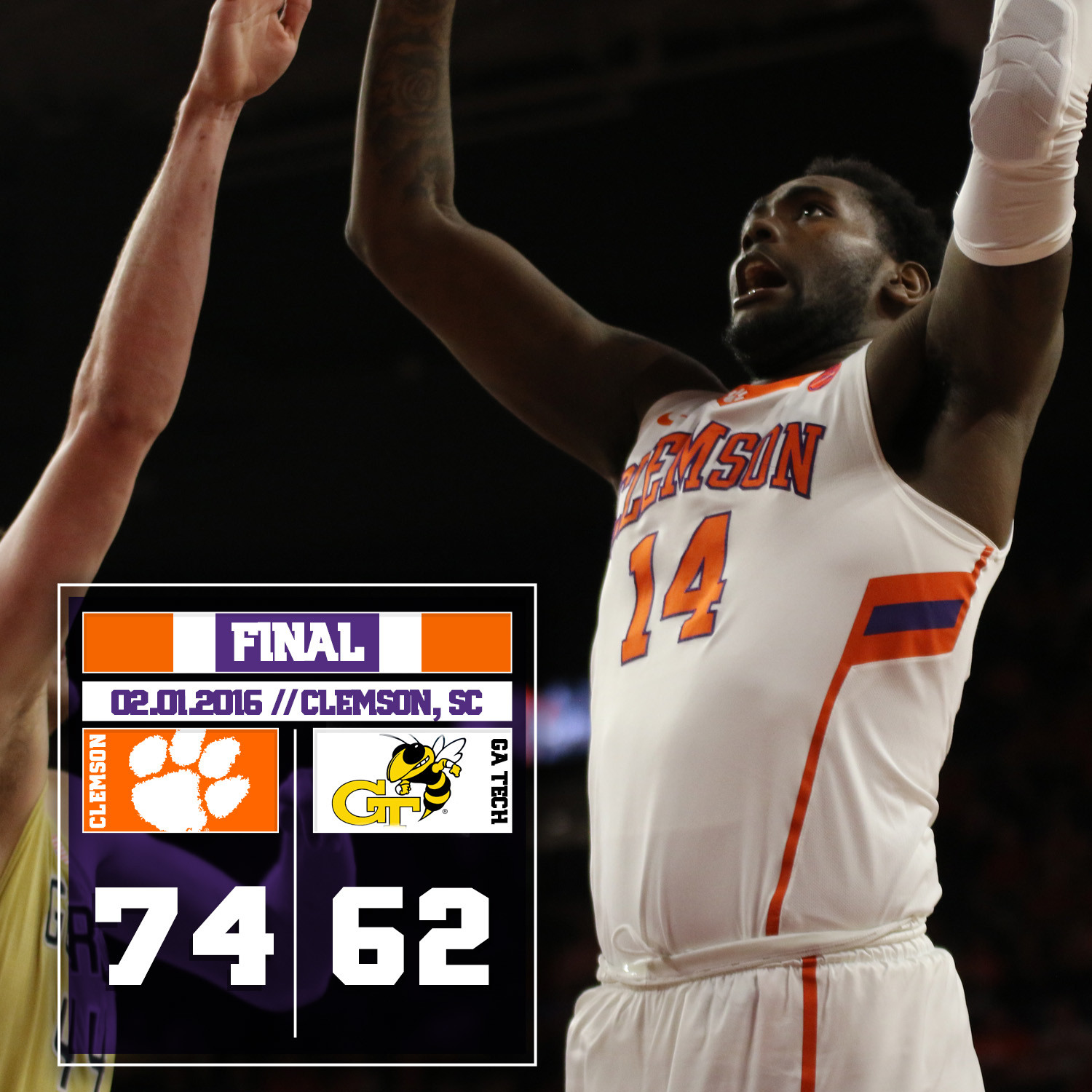 CLEMSON, S.C. — Elijah Thomas produced his first career double-double and Avry Holmes added 18 points as Clemson won its second straight game, 74-62 over a surging Georgia Tech team on Wednesday in Littlejohn Coliseum. The Tigers moved to 13-8 on the season, 3-6 in ACC play. Tech fell to 13-9 overall (5-5 in the ACC). It was Clemson’s 12th straight win at home over Georgia Tech, the program’s longest such winning streak in history over another ACC foe.

Thomas had 12 points to go with a career-high 10 rebounds. Holmes was perfect from three, hitting all four of his attempts. Shelton Mitchell added 15 points, his second straight game in double figures. Ben Lammers scored a career-high for Tech, pumping in 25 points in a losing effort.

The Tigers shot 44 percent for the game, despite poor numbers behind the arc (.313) and at the free throw line (.656). The biggest difference was rebounding, where Clemson actually had a +2 advantage. In three straight wins over the Tigers dating to last season, Tech had outrebounded Clemson by 38 on the glass.

Clemson led 11-7 after a score by Donte Grantham, but Tech reeled off nine consecutive points to take a five-point lead just past the midway point of the opening frame. Holmes knotted the game at 16 on his second three-point goal of the game, and Jaron Blossomgame drove baseline and hammered in a reverse dunk and added a free throw to give Clemson a 25-20 lead with 3:38 left. Holmes canned his third trifecta inside the final minute and Mitchell followed with a drive to put Clemson ahead 32-24 at intermission.

Lammers kept Tech in it early in the second half, extending on his point total before Thomas battled back on the boards. His layup gave Clemson its largest advantage at 39-26. The lead extended to Clemson’s largest over an ACC team when Mitchell hit a tough layup in traffic to put the Tigers up 53-32 with 9:35 to play. Lammers went on a scoring binge to pull the Jackets within 12 at 64-52. They later strung together buckets and cut the deficit to seven at 65-58 with 2:14 left. Still up only seven, the Jackets missed a long-ball attempt by Quinton Stephens and Thomas ripped down his 10th rebound and added a free throw on the other end. The Tigers made 9-10 free throws inside the final two minutes to seal it.

The Tigers return to action on Sunday at No. 15 Florida State. Tipoff is set for 12:30 p.m. on ESPNU from the Donald L. Tucker Center.

“Good win for us. I thought we played really well for most of the game. We had some stretches where we really played well, especially defensively. I know we had seven or eight straight stops early in the second half. I thought we did a great job on (Quinton) Stephens and (Josh) Okogie. That was key for us. Offensively, I thought we were a little anxious in the first half. Both teams seemed a little bit nervous. We both had some turnovers, but once we settled into the game, I thought we were pretty efficient offensively and obviously played well, even with Jaron (Blossomgame) dealing with foul trouble. So that was good to see, as well.”

“We’ve worked on our defense a lot. We went twice on Monday and twice on Wednesday and Thursday of last week. I just think that this team needs to continue to take strides in that area. We certainly can be better, and we are working toward it.”

On the solid play of Avry Holmes:

“This was a game where Avry (Holmes) really got into a rhythm. He got some good looks and knocked them down; he shot the ball really well. I thought he played with pretty good poise, didn’t take many bad shots. Today, Avry was really good.”

“First off I want to give Clemson, Coach (Brad) Brownell and his staff full credit. They played great. That’s a very good and well coached basketball team. When we don’t play with energy, effort, or execution we aren’t going to win. We did that for 32 minutes. We were much better the last eight minutes of the game, but it was too late against a really good Clemson team. We obviously dug ourselves in a hole. We’ve got a tough game Saturday at Wake Forest and we have to be better. We are not a team that can rely on one individual. We’re not built that way. We’re about team, and today, Clemson was the better team than we were. The loss falls on my shoulders because I’m the head coach, so obviously I didn’t get us prepared the way we needed to. But we’ll get after it and be much better Saturday at Wake Forest.”

On his team’s late run:

“We had four or five empty possessions, and we missed that free throw. If we would have made one or two more of those shots, it would have changed the course of the game, but we dug ourselves in such a deep hole, it was just too little too late. We were much better defensively that last stretch, but 17 turnovers is a recipe for disaster.”

On issue with energy from the start:

“It was absolutely an issue. We didn’t practice well on Monday. Quinton [Stephens] couldn’t practice or play until today due to an ankle injury. I didn’t even know if Josh [Heath] was going to play today. We are very thankful for Clemson’s medical department. They got him an IV, which made him feel a little better. He was very sick this morning so we didn’t know if he was going to play. Tadric [Jackson], also, had not practiced the last two days because of an ankle injury so we aren’t a team that can afford to have guys miss practices, either. We’ve got to be cautious and I have to listen to the medical staff. I just know when we don’t practice for a few days, it makes it really tough. We were out of sync and lethargic, but credit goes to Clemson first and foremost.”

On deeper bench use: