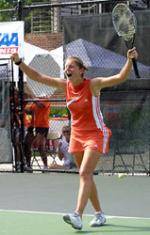 CLEMSON, SC – The Clemson women’s tennis team defeated the University of South Carolina by a score of 4-1 on Sunday at the Hoke Sloan Tennis Center in the finals of the Clemson Regional. The Tigers advance to the round of 16 to face Texas A&M on Thursday, May 20 at 9:00 AM in Athens, GA. This is the eighth time in program history that the Clemson women’s tennis team has advanced to the NCAA Final 16, and the first time under seventh-year Head Coach Nancy Harris. The Tigers’ only other trip to the Final 16 was in 1996.

“As a coaching staff we just tried to stay out of the way and let them play today,” said Clemson Head Coach Nancy Harris. “The girls knew what they had to do and they just went out there and did it. This team has executed and they’ve done everything we have asked them to do all season, but there’s still a lot more fight in them. We plan to take it one match at a time in Athens.”

South Carolina Head Coach Arlo Elkins said, “I don’t think we played badly. Clemson is a good team. We’re ranked 33rd and they are the fifth seed in this tournament and they should be better than we are. I’m obviously disappointed that we lost. I don’t ever like to lose and this is no different than any other time.”

In doubles play, Clemson’s third flight tandem of Richele LeSaldo and Karen Rombouts defeated South Carolina’s Miranda Gutierrez and Ayako Suzuki by a score of 8-2. At flight two, the Tigers’ Julie Coin and Alix Lacelarie clinched the doubles point for Clemson with an 8-4 victory over USC’s Christyn Lucas and Magda Wojdylo.

In singles action, Karen Rombouts defeated USC’s Justine Walsh, 6-3, 6-3. The University of South Carolina picked up its only point of the match at flight three singles, as USC’s Laura Ganzer defeated Julie Coin of Clemson scored the decisive match point for the Tigers with a 6-2, 6-2 win over Danielle Wiggins.