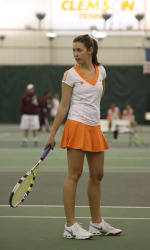 MADISON, WI – Ani Mijacika won her eighth straight singles match and, in doing so, clinched the 12th-ranked Tiger women’s tennis team’s 5-2 victory over #13 Fresno State on Saturday at the ITA National Team Indoor Championships. Clemson will face Southern California on Sunday, the final day of the tournament, at the Nielson Tennis Stadium on the campus of the University of Wisconsin.

Mijacika defeated 17th-ranked Melanie Gloria at the top singles position in straight sets (6-1, 7-5) and has now posted wins over five straight top-20 opponents. The Tiger junior was ranked fourth in the most recent ITA Tennis singles poll with the new listings set for release next week.

Clemson’s win avenged a loss to the Bulldogs in last year’s ITA Indoors and was the Tigers’ first over Fresno State in three tries. Clemson is now 6-2 for the 2009 season. Sunday’s match against the Trojans is scheduled for 4:30 pm (Eastern).

The Tigers captured the doubles point as Clemson teams posted wins at flights two and three. Fresno State’s second-ranked duo of Renata Kucerkova and Anastasia Petukhova claimed the first match with an 8-4 win over Ani Mijacika and Ina Hadziselimovic then partnered to upset #23-ranked Tinesta Rowe and Melania Gloria, 8-6, at flight two while Estefania Balda and Alexandra Luc clinched the point for the Tigers, downing Danon Beatty and Laura Pola by an 8-4 margin.

Clemson has taken the 1-0 lead into singles play in seven of its eight matches in 2009 with only Boise State posting the doubles point in the first round of the ITA National Team Indoors Kick-Off Weekend. Saturday’s singles matches started with the second, fourth and sixth positions after flights one, three and five played first on Friday.

Bek then put the Tigers ahead, 2-0, with a straight set victory at flight two. She defeated 29th-ranked Anastasia Peukhova by a 6-2 margin in the first set and then held off the Bulldog player for the 7-6(2) win in the second.

Rowe of Fresno State scored her team’s first point as she defeated Balda at the fourth position (7-6(2), 6-3).

Luc put Clemson within one point of the win as she outlasted Beatty in a three-set battle at flight six. Luc easily took the first set, 6-1, but Beatty won the second by a 6-3 margin. The two players then fought to a 6-6 tie in the third set before Luc pulled out the victory.

The Bulldogs scored their second point with Kucerkova’s victory over Wong at number three (6-2, 7-5), while Hadziselimovic picked up a win at flight five for the 5-2 final score. The Tiger junior defeated Pola in straight sets for her 11th win of the year.