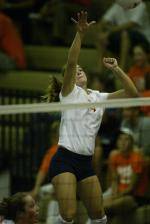 CLEMSON, S.C. – The Tiger volleyball team claimed the 2003 Clemson Invitational crown with a 3-2 win over the University of Illinois-Chicago on Saturday night at Jervey Gym. With the win, Clemson stands at 10-5 on the season, while Illinois-Chicago falls to 6-8 on the year. The Tigers are on an eight-match winning streak, dating back to a 3-1 victory over in-state rival South Carolina on Sept. 9. The Tigers are 6-2 at home in 2003.

In the tournament finale, Clemson dropped the first game 27-30, then rallied to win games two and three by scores of 30-26 and 30-21. Illinois-Chicago edged the Tigers 31-29 in game four, then Clemson captured the decisive game with a convincing 15-5 score. For the match, Clemson hit .263 with 18 team blocks (eight solo) and five service aces. Illinois-Chicago recorded a .128 hitting percentage with eight team blocks and nine service aces.

Clemson returns to action on Tuesday, Sept. 23, as the Tigers open conference play at North Carolina. Tuesday evening’s match is slated for 7:00 PM in Chapel Hill.