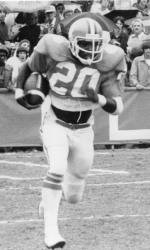 In preparation for the annual Clemson-South Carolina football game, ClemsonTigers.com will be highlighting five memorable games in Death Valley between the schools this week on Tiger Tracks. You can view highlights from the Tigers’ 27-6 victory over the Gamecocks in 1980 now on Tiger Tracks.

Defensive back Willie Underwood played 47 games for the Tigers, but never had an interception until his final contest. He made up for it in his last game as a Tiger when he had two thefts for a combined 101 yards in returns. His 37-yard interception return for a touchdown iced Clemson’s 27-6 victory. It is still the most interception return yards in a single game by a Tiger. Underwood also had 17 tackles in the game and was named National Defensive Player of the Week by Sports Illustrated.

The 1980 Clemson-USC game was also the first time the Tigers wore orange pants for a contest.

“Willie Underwood went out in great style,” said head coach Danny Ford after the game. “He’s been starting for us for four years and he certainly saved his best performance til last. It was Underwood and Jeff Davis who suggested the orange pants about six weeks ago.”

Willie Underwood changes the momentum in the third quarter…Watch (1.7 MB)

Underwood seals the deal with his second interception…Watch (1.4 MB)