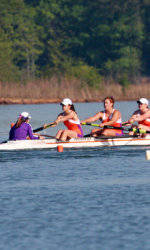 Oak Ridge, TN – The Clemson rowing team finished 11th overall at the Aramark Central/South Sprints this weekend on Melton Hill Lake. The Tigers were fifth among schools in the South Region. Overall, 23 schools participated in the regatta.

Virginia won the event with a total of 440 points, finishing ahead of Ohio State (366) and Tennessee (352). The Tigers totaled 225 points for their 11th-place showing. Clemson improved vastly as a team in 2007. The Tigers were 18th at regionals in the spring of 2006, including eighth among schools in the South Region.