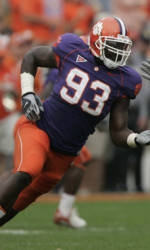 Clemson defensive end Gaines Adams is listed among the top NFL first-round candidates heading into Saturday’s draft in New York City. The highest draft choice for a Clemson football player in history is a #4 selection by Banks McFadden in 1939. That draft was on December 9, 1939, the same calendar year in which McFadden played his senior year for the Tigers. He then played for Clemson in the 1940 Cotton Bowl on January 1, 1940. McFadden played just one year in the NFL for the Brooklyn Dodgers and led the league in yards per rush. But, he decided the bright lights of New York were not for him, so he returned to Clemson and started a coaching career under Frank Howard after serving in the military.

Clemson has had five players taken in the top 10 overall, but none since Terry Kinard was the 10th selection of the 1983 draft by the New York Giants.

When Adams is taken in the first round on Saturday he will become the third first-round draft choice under Tommy Bowden. He will also be the third first-round draft choice under Bowden to earn his degree from Clemson. Tye Hill (2006) are the other two firstround picks under Bowden and they both have their degrees from Clemson. Adams received his degree from Clemson in December of 2006.

Clemson could have other players taken in the draft as Anthony Waters, C.J. Gaddis, Nathan Bennett, Dustin Fry and Chansi Stuckey are candidates according to many draft projections. The record for selections from Clemson in one year is 10, set in 1983. That is also an ACC record (tied with Florida State in 1995). The 1991 draft featured eight Tigers who were selected, the second largest Clemson contingent on record. Clemson has not had more than three players chosen in a year since the 1999 draft when six Clemson players were selected off Tommy West’s last Clemson team.

Clemson has had 13 players drafted since Tommy Bowden became the head coach of the Tigers in 1999. All 13 have made an active NFL roster and 11 of the 13 have gone on to play in at least one NFL game, including all three players who were chosen last year, Tye Hill, Charlie Whitehurst and Charles Bennett.

Getting drafted in the top 100 of the NFL draft is usually a good sign for Clemson players. Since 1989, Twenty-six of the 27 Clemson players taken within the top 100 picks of the draft have gone on to play in an NFL game. The only player who has failed to do so so far is Donnell Washington who entered the draft after his junior year in 2003. He was the 72nd pick of the 2004 draft by the Green Bay Packers. Washington sat out the 2004 season due to injury and was injured most of the 2005 season, but was activated for one game. He was cut prior to last season by the Oakland Raiders.

Clemson has had 20 first-round selections in the NFL draft dating to Banks McFadden selection in the 1940 draft by the Brooklyn Dodgers. That does not included Harvey White, who was “one of many” first-round pick of the Boston Patriots in 1960 when the Patriots were in the AFL.

The ACC had its best year ever in the NFL draft last year when there were 12 player taken in the first round, including 10 on defense, and 51 selections overall. The ACC led the nation in both categories last year.

Clemson has had 189 players taken in the NFL draft over the years, including 20 in the first round. Clemson trails only Miami (FL) and Florida State among ACC schools in terms of first-round draft choices.