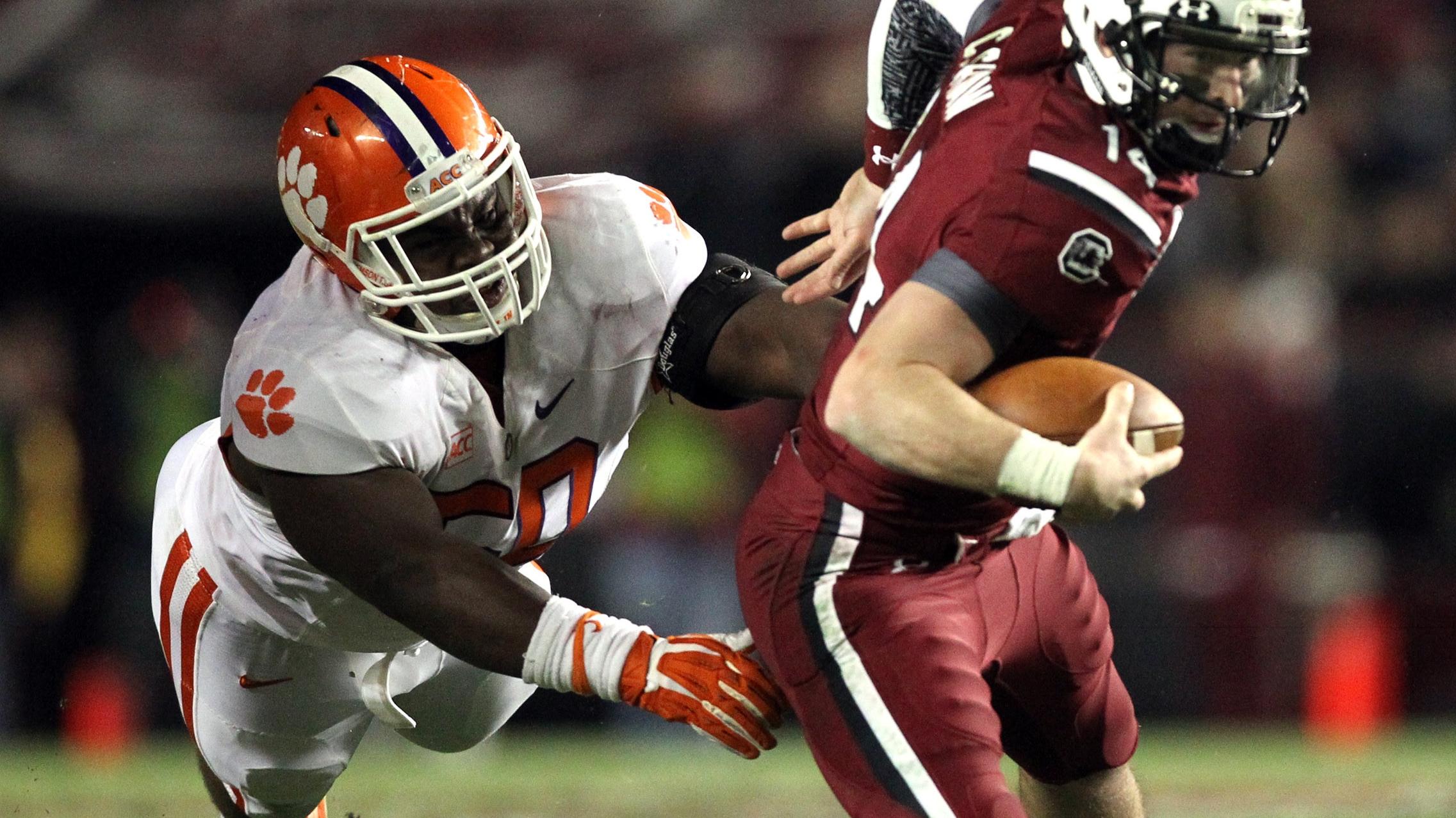 CLEMSON, S.C. – Clemson defensive players Stephone Anthony, Vic Beasley and Grady Jarrett have been named to the 2014 Bednarik Award Watch List. The award is given each year to the top defensive player in the nation by the Maxwell Football Club of Pennsylvania.Clemson is the only ACC school to have at least three Bednarik Award Watch List players, and one of 10 schools overall.  Stanford has the most with four players, while Clemson, Texas, Michigan State, TCU, Alabama, Southern Cal, Georgia, Washington and Oklahoma all had had three. Clemson and Georgia face each other in the season opener on August 30.The ACC has 12 returning players who had at least 10 tackles for loss last year and five of the 12 play for Clemson. Anthony, Beasley and Jarrett are three of those five. The trio of Clemson senior defenders have combined 438 career tackles, 74.5 of which have been tackles for loss, including 32 sacks.Beasley was a semifinalist for the award last year when he was a consensus All-American, one of just three consensus selections returning for 2014. The senior ranked second in the nation in tackles for loss per game with 1.8, was third in sacks per game at 1.0 and was 13th in caused fumbles with 0.31 per game. Beasley had 44 total tackles, 23 of which were behind the line of scrimmage and 13 of those were sacks.Beasley was a finalist for the Ted Hendricks Award and was a first-team All-American by USA Today, Sporting News and the Walter Camp team. He was a second-team Associated Press All-American.Anthony, a third-team All-ACC player in 2013, was the top tackler on Clemson’s defense that helped the Tigers to an 11-2 record and number-seven final national ranking by USA Today. The senior from Polkton, N.C. had 131 tackles, including 13.5 tackles for loss and four sacks. He also had five passes broken up.  His only interception took place on the final defensive possession of the season in the 40-35 win over Ohio State.Jarrett had 83 tackles a year ago, including 11 tackles for loss, when he was named an honorable mention All-ACC player. His 83 tackles ranked third on the team overall, best among defensive linemen. He has 134 tackles for his 35-game career, 24 as a starter.Semifinalists for the Bednarik Award will be announced November 3, 2014, while the three finalists will be unveiled November 24, 2014. The winners of the Bednarik Award will be announced as part of the Home Depot College Football Awards Show held on December 11, 2014. The formal presentations of these awards will be made at the Maxwell Football Club Awards Gala hosted by Revel Casino Hotel Atlantic City on March 6, 2015.