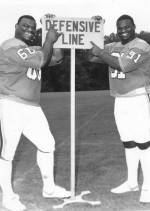 The South Carolina Athletic Hall of Fame’s Class of 2005 has an alphabet-soup flavor: four from the NFL, two from the NBA, one from the PGA and another from the old AAGPBL.

The Perry Brothers, William (aka “Refrigerator”) of the Chicago Bears and Michael Dean of the Cleveland Browns, join former Green Bay Packer wide receivers Robert Brooks and Gary Barnes to form the NFL contingent to be inducted. They join Tyrone Corbin and Jim Fox from the NBA, Jay Haas from the PGA and the late Elizabeth Mahon from the All-American Girls Professional Baseball League made famous in the movie, “A League of Their Own.”

The eight former pros will be inducted at the SCAHOF annual banquet on May 5 in Columbia at the Embassy Suites Hotel at the Greystone Blvd exit off I-126. Tickets, at $500 for a table of eight, or $100 per person, can be purchased by contacting the hall of fame office at 803-779-0905 or by mail at 1310 Lady Street, 9th Floor, Columbia, SC 29201. Additional information can be found at www.southcarolinaathletichalloffame.org.

Annual awards for top pro and amateur athletes from the Palmetto State along with special citations will also be part of the banquet ceremony.

The Perrys, from Aiken, starred at Clemson as did Barnes. Brooks, a Greenwood native, played at South Carolina. Fox, who hails from Sandy Springs, Ga., played for legendary Frank McGuire at USC in the 60s. Corbin, a Columbia native, played at DePaul. Haas, from Greer and Wake Forest, is still playing the PGA Tour at age 51. Mahon, from Greenville, died in 2003.

William Perry, nicknamed “Refrigerator,” for his 350-pound-plus frame, played at Clemson from 1981-84 and became the school’s first three-time All-American (twice a consensus A-A). The three-time All-ACC star led the nation in tackles for losses at 2.45 per game. Perry helped win the national championship for Clemson as a freshman and, after becoming a first-round pick by Chicago, helped the Bears win the 1985 Super Bowl as an NFL rookie, the first of his nine years in the pros. The Super Bowl victory, in which Perry played goal-line fullback as well as defensive tackle, earned The Fridge a spot on the cover of Time Magazine for the Jan.1986 issue. He was also a member of Clemson’s All-Centennial team, the Clemson Hall of Fame (in 2002) and the All-ACC 50th anniversary team, and one of ACC’s 50 greatest athletes (in 2003).

Michael Dean Perry played for the Tigers from 1984-87, earning first-team All-American and ACC Player of the Year honors as a senior in 1987. He set the ACC records for career tackles for loss (61) and career sacks (28), both held previously by his brother. He also tied William for the single-season school sack record of 10. His five sacks against N.C. State in 1987 also tied for the single-game school mark. The finalist (one of three) for the Outland Trophy played in the Hula Bowl and Japan Bowl as a senior. The two-time All-ACC defensive tackle became a second-round NFL draft pick by Cleveland, made the Pro Bowl six times and made All-Pro four times. Inducted into the Clemson Hall of Fame in 2000 and named to the school All-Centennial team in 1996 and the 50-year All-ACC team in 2002.

Barnes played wide receiver at Clemson and scored the final points in the last Big Thursday game. He played two seasons with the Green Bay Packers of the NFL and won a pre-Super Bowl championship with the Packers before becoming the first player to sign a contract for NFL-expansion team, the Atlanta Falcons. He scored the first TD by air in Falcons history. Barnes was named an end on Clemson’s one-platoon Centennial team. He has served as a municipal court judge in Clemson for the past 18 years.

Greenwood native who ranks No. 3 on USC’s all-time receptions list with 156 catches for 2,211 yards and 19 touchdowns, and played in the Senior Bowl before going on to a nine-year NFL career with Green Bay and Denver. With the Packers, Brooks succeeded Sterling Sharpe as the team’s go-to receiver and broke two of Sharpe’s team records. For his career, Brooks caught 309 passes for 4,276 yards (13.8 ypc average) and 32 touchdowns. In 1993, Brooks led the NFL in kickoff returns with a 26.6 average. He ranks among only eight players in NFL history to have returned a pass 99 yards. 1995, the 6-0, 185-pounder caught 102 passes for 1,497 yards and 13 TDs, ranking in the NFL in all categories. Brooks owns 13 100-yard reception games and two 1,000-yard seasons. He started the Lambeau Field tradition of jumping into the stands and high-fiving fans, a crowd-pleaser that has since spread to other stadiums. He twice came back from serious injuries to his knee and lower back to re-establish his place among the league’s elite. In 1997, the NFL named Brooks its Comeback Player of the year. Packers’ trainer Pepper Burruss said of Brooks: “On the basis of toughness per pound, Robert Brooks has to be perhaps the toughest player I’ve been around in my 23 years in the NFL.”

A late blooming 6-foot-10 center who thrived in his one season under Coach Frank McGuire as a senior in 1964-65, Fox led the Gamecocks in scoring that year (17.8, #11 in the ACC) and rebounding (13.6, #2 in the ACC to only North Carolina’s Billy Cunningham). Against Clemson, Fox had 30 points and 23 rebounds in one of the greatest performances in school history. Fox went on to play two years in Europe, honing his game in preparation for a 10-year NBA career in which he averaged 9.3 points and 7.4 rebounds while playing for several teams. He outplayed Wilt Chamberlain once in a nationally televised Christmas Day game. Seattle Supersonic’s fans voted his game of a team-record 30 rebounds and 25 points as the Number three performance in franchise history. In 2004, The State newspaper named Fox as one of the top five most successful USC stars to play in the NBA. Jim’s senior-year USC stats and pro-career stats are almost identical to those of SCAHOF inductee Tom Owens.

The Columbia native excelled at the high school, college and professional levels. He helped lead Flora High to the 1981 state championship, and later starred at DePaul University. Corbin played in the NBA from 1985-2001, performing at various times as both a go-to starter and valuable reserve during his 14 seasons. For his career, the versatile 6-foot-6, 225-pounder averaged 9.3 points, 4.8 rebounds and 1.8 assists. While playing mostly at small forward and off-guard, he also filled in when needed at power forward and point guard. His best seasons came in Minnesota as a starter, averaging 18.0 points in 1990-91, 14.7 in 1989-90 and 14.4 in 1992-93. He also played a key supporting role to Karl Malone and John Stockton in Utah in 1992-93 (11.6 points) and as Atlanta’s “Super Sub” in 1997-98 (10.6 points). Throughout his career, Corbin remained one of the NBA’s most active players in dedication to helping community charities and programs. He is married and has two children and now serves as an assistant coach with the Utah Jazz.

This Greer native has played on the PGA Tour for 28 years and won 9 tournaments. The Wake Forest alum has played in 20 Masters; in 1995 he finished tied for third at Augusta. In 2003 he finished second in the PGA Championship, and third in the Bob Hope Classic while shooting a second-round 61(two shots off the tour record). He was selected as the 2004 Athlete of the Year by The State newspaper. His 2004 accomplishments include: making his third U.S. Ryder Cup appearance; winning $2,071,626 (second best of his career) at age 51; eight Top Ten finishes (including ninth in the PGA); second in the Senior PGA Open; tied for third in the U.S. Senior Open; ranked No. 27th on PGA tour list; ranked 34th on Champions tour with just three appearances; named as recipient of Payne Stewart Award and won the SC Golf Association’s Service to Golf Award.

One of only two South Carolina natives to play in the All-American Girls Professional Baseball League portrayed in the movie “A League of Their Own.” The other AAGPBL star, Viola Thompson-Griffin, was inducted in SCAHOF in 1998. Mahon played sandlot baseball and fast-pitch softball and basketball in the mill village league in her native Greenville. She played four years of intramural softball, basketball and field hockey at Winthrop College during an era closed to women’s intercollegiate athletics. After graduation from Winthrop in 1942, she starred in the AAGPL. Playing centerfield and batting cleanup for the South Bend Blue Sox, she batted .276 (sixth best in the league) and twice led the AAGPL in RBI. In 1946, she set a league RBI record with 72. She made the all-star teams of 1946 and 1949, and led the Blue Sox to the championship in 1951. She ranks fourth all-time in the league’s career RBI list with 400.