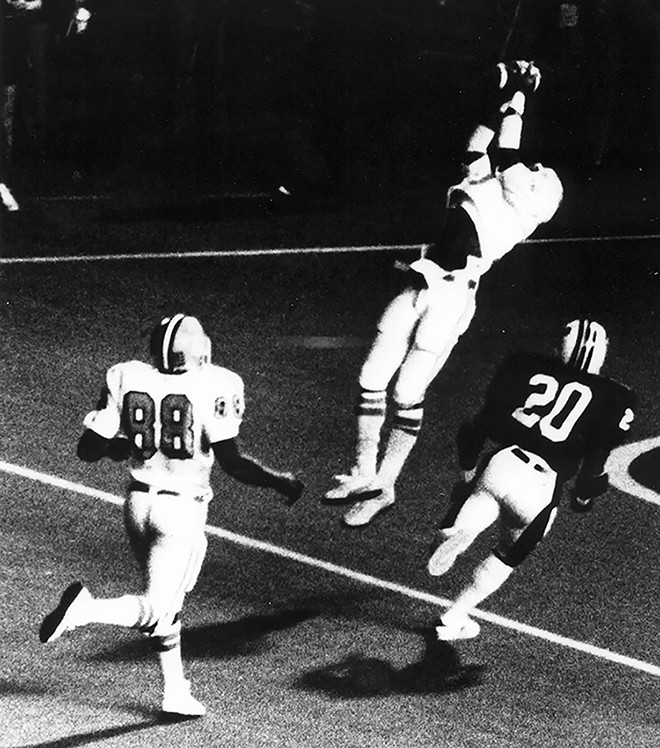 It all started following Clemson’s 7-6 victory over Georgia in Athens. As the Tigers were making the 70-mile hike back to Clemson, Pell asked the bus driver to pull over. Pell wanted to savor the victory considering it was Clemson’s first win at Georgia since 1914.

So as the legend goes, Pell went into a convenience store and bought every player on the team a cigar to commemorate the win. The cigar celebration became a big part of the 1977 season as the Tigers used the Georgia win to jump start a great run.

Pell and the Tigers went on to win seven straight games, and after each victory, they lit up a cigar. Well, sort off. Clemson wide receiver Jerry Butler chose not to smoke his cigars and instead he scribbled the score and the date on each of his. There was just one place left in his collection back at his dorm – the South Carolina game.

But, South Carolina wanted no part of this so-called rite of passage. The Gamecocks were still smarting from the previous year’s loss in Clemson when the Tigers, despite winning just two games prior to it, pounded USC, 28-9, knocking it out of contention for a possible Peach Bowl bid.

The roles were reversed this time around. The Gamecocks were sitting at 5-5 and knew their season was over regardless of the outcome, but Clemson (7-2-1) was in the running for a Gator Bowl invitation and needed a victory over their archrival to secure the bid and go bowling for the first time since 1959.

During the first two-and-half quarters, everything was pretty much going according to plan. The Tigers had a veteran team that was hungry and had a head coach that got them believing in themselves. The Gamecocks were young and unsure of what they could accomplish.

The Tigers jumped out to a 17-0 lead by halftime, thanks to a Warren Ratchford touchdown, a 30-yard field goal by Obed Ariri and a Lester Brown touchdown from the one. When fullback Ken Callicutt rumbled 52 yards midway through the third quarter, Clemson found itself up 24-0 and well on its way to victory.

“Dwight Clark and I did the unpardonable; we started talking about how great we had played,” quarterback Steve Fuller said to The (Columbia) State Newspaper back in November of 2002.

It was about that time when South Carolina’s Spencer Clark raced untouched for a 77-yard touchdown to cut the lead to 24-7. Over the next eight minutes, the Tigers could do nothing right and USC could do no wrong.

On Clemson’s next three possessions, it fumbled the ball, went three-and-out and then shanked a punt 10 yards. USC took advantage of each mistake to crawl back in the game with two Steve Dorsey touchdowns to make the score 24-20.

With 7:02 to play, South Carolina again gained possession of the football and had a chance to take the lead for the first time all night as they moved the ball to the Clemson 40.

“We called a pass route we had not run all day,” South Carolina receiver Phil Logan said years later. “The defensive backpedaled and I curled.”

When Logan curled, quarterback Ron Bass delivered a strike. It was fourth-and-10 at the Clemson 40, and USC seemed desperate to make one last play to at least extend the drive. What Logan did not expect was to be so wide open.

“I expected to be hit, but nobody was there,” he said. “I cut across the field, got some blocks and I was never touched.”

Logan’s 40-yard touchdown gave the Gamecocks a 27-24 lead with one minute and 48 seconds to play. Logan and his teammates were so confident the game was over. Logan was seen lifting his jersey to the crowd revealing a garnet t-shirt underneath with white letters which read “No Cigars Today.”

“That kind of ticked this old boy off,” Butler said.

It appeared to motivate the entire Clemson offense. Facing a third down-and-seven, from the Clemson 36 yard line, Fuller hit Rick Weddington for 26-yards to the South Carolina 38 yard line and a first down. After an incompletion, Fuller found Clark across the middle for 18 yards, setting Clemson up at the 20.

The Tigers quickly rushed to the line to run another play, when Fuller noticed South Carolina’s defense was confused and they had trouble getting players onto the field. The play called for Butler to cut to the corner, but USC got pressure to Fuller and forced him to throw the ball earlier than he would have liked.

Butler made a leaping, twisting catch that no one else could have made in that game, and no one else has made since.

“It was a first down play. We had plenty of time and I threw it where he would catch it or it would be incomplete,” Fuller said. “Nine times out of ten, it would have been incomplete.”

Instead, it’s a play simply known as “The Catch”.   The 20-yard pass play gave Clemson the lead and with the extra point Clemson led 31-27, with :49 left.   The Tigers held on to defeat the Gamecocks.