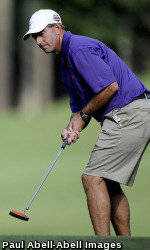 GREENSBORO, GA – Paul Johnson and Jon Barry of Georgia Tech successfully defended their Chick-fil-A Bowl Challenge championship on Tuesday with a one stroke victory over the field to take home the $125,000 first-place scholarship prize.

After a seven-under-par effort on the front nine, Georgia Tech birdied hole 10 to take a two shot lead, but then fell back a shot on number 11. Johnson and Barry rebounded to birdie the 12th. After pars on the next three holes, they birdied numbers 16 and 17 to move to 10-under.

Needing a par at 18 to hold onto the victory, Johnson hit a wedge to within five feet and Barry nailed the putt to preserve the win over the teams from Florida State and Maryland.

“It was a first-class tournament. it’s fun to play out here and I’m very fortunate to have a partner that’s as skilled as Jon,” said Paul Johnson, Georgia Tech head coach. “It got real competitive coming down the stretch. We knew on 16 that we had to get probably to -10 because we knew the guys had strokes on us on the last hole.”

“I didn’t want to have to hit a five footer to win this tournament, but coach hit a great chip in there. We knew we had to make par on the toughest hole in Georgia and we got it done. It was a lot of fun,” Barry said. “I’ll tell you, my mouth was dry and I was as nervous as I’ve ever been. Thankfully we got it done and had a great time.”

“Thanks to the Chick-fil-A Bowl and all the volunteers. It’s a wonderful event that we look forward to every year,” Barry said.

“Our congratulations go out to team Georgia Tech for a great victory today. Coach Johnson and Jon Barry really brought their `A’ game today,” said Gary Stokan, Chick-fil-A Bowl president and CEO. “We were all blessed to have so many great universities represented out here today and we feel fortunate to be in a position to help deliver more than $750,000 in scholarship and charity through this year’s Chick-fil-A Bowl Challenge.”

After the first nine holes, the defending champions from Georgia Tech (-7) held a one stroke lead over the teams from North Carolina (-6) and Miami (-6). Alabama, South Carolina and Virginia Tech were in the hunt at -5.

The Yellow Jackets’ recorded five birdies and an eagle on the third hole en route to a seven-under-par front nine, which was best in the field.

The Chick-fil-A Bowl Challenge is the country’s premier head coach and celebrity charity golf event featuring NCAA head coaches and former athletes and celebrities from the same school competing against their rivals for a share of a $520,000 scholarship purse.

In addition to the $520,000 scholarship purse, another $243,000 was generated for charitable organizations.

In the Closest to the Pin Contest, Meyer hit the 94-yard shot to within two feet to win the coaches division. McCrary’s shot was within five feet of the cup.

All four of the winners will receive $5,000 in scholarship prize money for their universities.

The full 15-team field of NCAA head coaches and celebrity alumni will compete in the tournament round of the Chick-fil-A Bowl Challenge tomorrow, for a share of the $500,000 scholarship purse.

The Chick-fil-A Bowl Challenge is the nation’s premier head coach and celebrity golf gathering and takes place April 29 – May 1 on the picturesque courses at Reynolds Plantation, located on Lake Oconee outside Atlanta. A significant contributor to the Chick-fil-A Bowl’s yearly charitable and scholarship donation efforts, the Chick-fil-A Bowl Challenge’s main event features teams composed of a university head coach and a celebrity or former athlete from the same school competing in a scramble format against other university teams from around the country. In 2011, the tournament raised more than $638,000 in charity and scholarship.