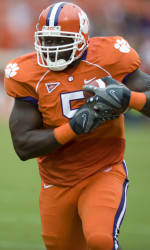 CLEMSON, SC – Rendrick Taylor has signed a free agent contract with the Tampa Bay Bucs. Taylor was invited to a tryout camp last weekend and impressed the organization. He will report back to Tampa for a mini-camp May 17. He will work as a fullback and tight end.

Taylor, who will graduate from Clemson on Friday, played in 38 games for the Tigers over the last five years, 10 as a starter. He finished his career with 54 receptions for 533 yards and a touchdown and had 15 rushes from the full back position for 36 yards. He played on three Clemson teams that finished the season in the final AP Top 25 (2005, 2007 and 2009). He had a career high 25 catches for 259 yards in 2007 and was fourth on the team in receptions that year. He played wide receiver, tight end and fullback over his Clemson career.

Taylor is the fifth member of the 2009 Clemson team to sign a free agent contract. Five other Tigers were drafted two weeks ago, meaning 10 members of the 2009 team will be in NFL camps in May.

Former Tigers Justin Miller has signed a contract with the Arizona Cardinals. Miller is in his sixth year in the NFL. He played one game apiece for the New York Jets and Oakland Raiders last year. For his career he has 99 tackles as a defensive back, but is best known for his abilities as a kick returner. In five years he has five kickoff returns for touchdowns and has a 26.1 average on 152 career kickoff returns. He was a starting cornerback for the Jets in 2005 and 2006.