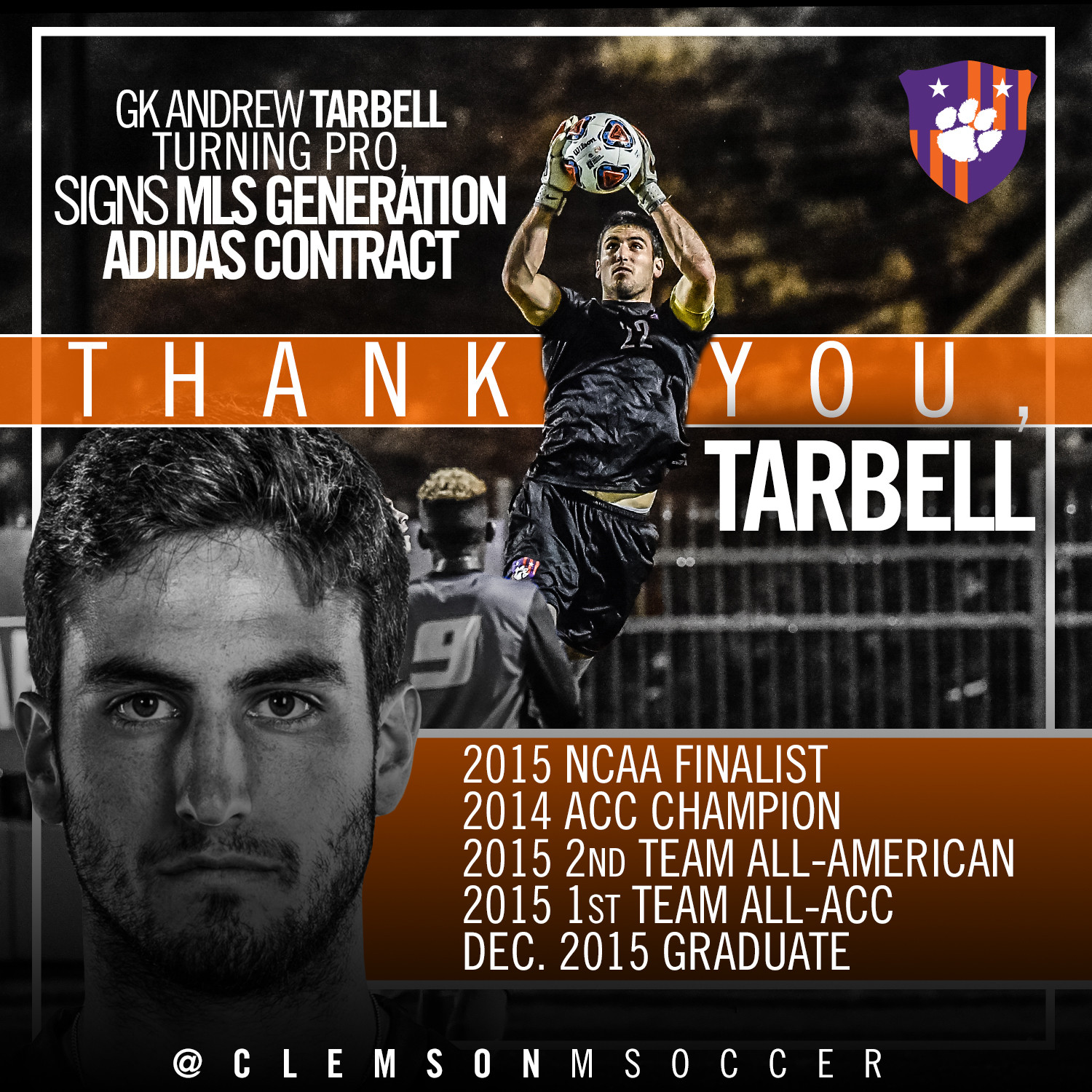 CLEMSON, S.C. – Three weeks after earning his undergraduate degree from Clemson University in Civil Engineering, and four weeks after leading the Tiger men’s soccer team to a national runner-up finish at the 2015 College Cup, redshirt junior goalkeeper Andrew Tarbell has signed a Generation adidas contract with Major League Soccer. Tarbell, who will forego his final year of collegiate eligibility, is one of just five NCAA underclassmen signed to the MLS’s prestigious deal in 2016, which guarantees him a contract with whichever team drafts him.

The native of Mandeville, La., was named to the NSCAA All-America Second Team, the College Cup All-Tournament Team and the All-ACC First Team in 2015, among many other postseason honors. He started all 24 games in goal for Clemson in 2015, playing 2,244 minutes, which ranked second in the nation among minutes played by a goalkeeper, and posted a 17-3-4 record. He tallied 84 saves, a figure which was first in the ACC, and posted a .792 save percentage, a 0.88 goals against average and nine solo shutouts on the season.

Tarbell and the Tigers advanced to the College Cup final before falling to National Champion Stanford and finishing as the national runner-up in 2015. In Clemson’s semifinal match, a 0-0 draw against Syracuse on Dec. 11, Tarbell recorded a season-best eight saves, which also tied his career high for a single match. He went on to post one save in the penalty kick round, in which the Tigers advanced 4-1.

In addition to his impressive on-field accomplishments, Tarbell was also highly successful in the classroom. He was named to the CoSIDA Academic All-District 4 Team in 2015 and was a frequent member of Clemson’s Dean’s List. Tarbell earned his undergraduate degree from Clemson in December of 2015, finishing his collegiate career with a cumulative GPA above 3.5 in Civil Engineering.

ABOUT THE MLS GENERATION ADIDAS PROGRAMPlayers who join MLS as part of the Generation adidas program receive the opportunity to develop their game and hone their skills at the professional level by training and playing with one of Major League Soccer’s 20 professional clubs. Generation adidas players do not count against an MLS team’s salary budget.