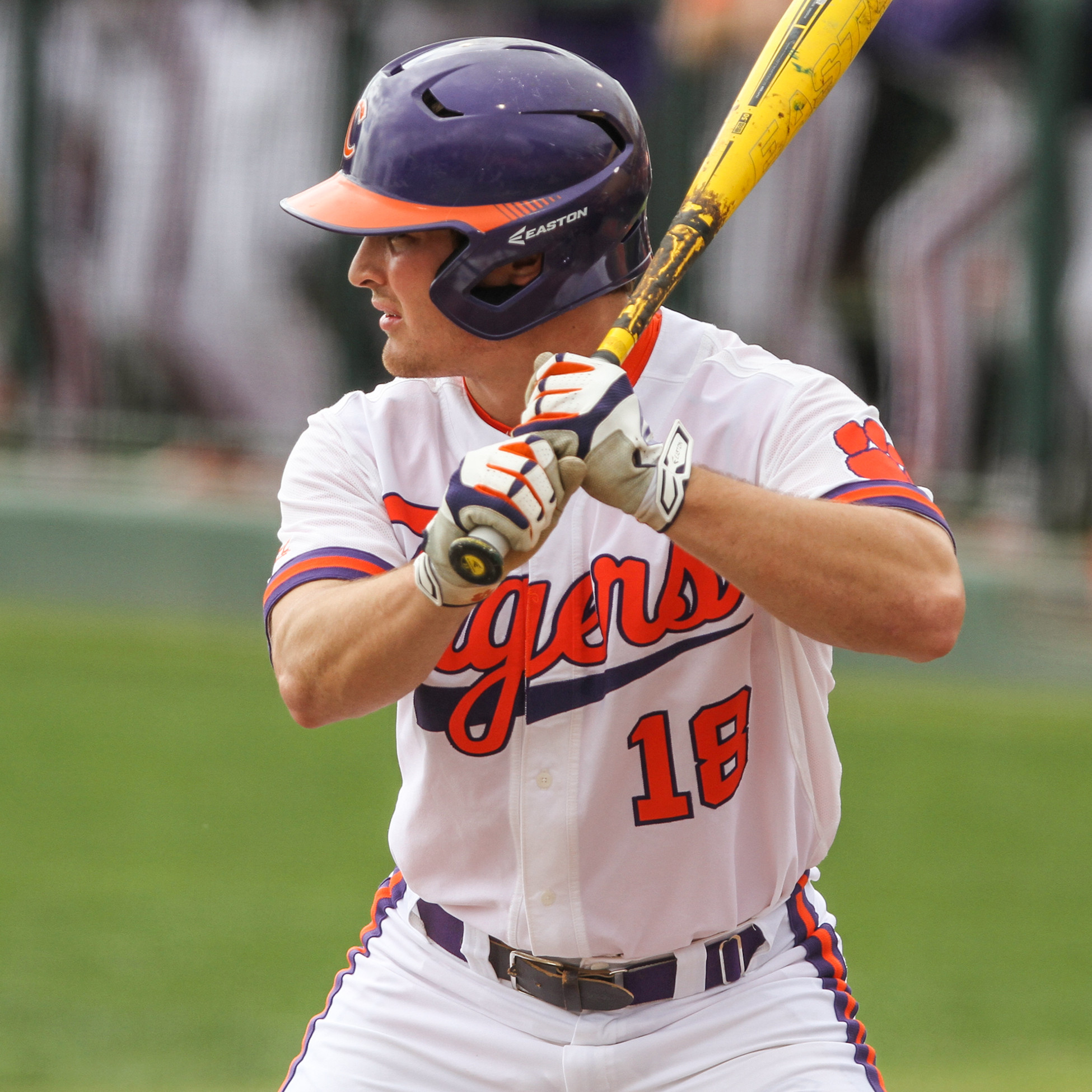 The key to winning baseball games is by getting men on base, and no Clemson player is more effective than Tyler Slaton. As the leadoff hitter, Slaton is tasked to get on base at all costs. The senior prides himself for getting on base and setting the table for his teammates who bat behind him in the lineup.

“It’s very important,” said Slaton. “Getting on base is how you score runs and how you win games, so that’s how I look at it and how I try to approach it.”

Patience is natural for the athletic Slaton. A two-sport star in high school, he doubled as a center fielder and a running back for his football team.

The 5’8″, 200-pounder is the all-time leading rusher at North Forsyth High School. Every successful running back acknowledges that the key to success is patience, waiting for your blockers to create a hole and hitting the hole decisively. Slaton admits that he uses a “running back mentality” while playing baseball.

His athleticism and versatility captured the attention of the Tiger coaching staff. That along with the reputation of the university made Slaton’s decision as easy one.

“The school, the academics are really solid here,” said #18. “The tradition is one of the best in the country, so those two were probably the two biggest factors.”

While seeing significant playing time as a first-year freshman, the adjustment to college ball was still difficult.

“The game is a lot faster,” admitted Slaton. “Everyone is as good as you or better than you, and that’s an adjustment you have to make. In high school, you were usually the better player, but at this level, everyone is just as good as you.”

After strictly playing center field in high school, Slaton was asked to man every position in the Clemson outfield, demonstrating his versatility. Amassing 17 starts (seven in center, five in left and five in right), Slaton batted only .189 but sported a .353 on-base percentage by drawing walks and being hit by pitches. His high on-base percentage was converted into 15 runs in his rookie season.

During his sophomore season, Slaton became an every-day starter in left field, a position he had never played growing up. Accustomed to playing the center of the outfield, Slaton learned the intricacies of the corner spots.

“I never really played left field growing up, so it was really different. I had to get used to the balls hit out that way. The ball has a different tail, especially from lefthanded hitters, so it took a little getting used to, but it wasn’t too bad.”

With regular playing time, Slaton could make his mark on Clemson baseball. In ACC regular-season games, he found his stroke at the plate, maintaining a .295 batting average with a .393 on-base percentage. Slaton also excelled defensively, finishing the season with five outfield assists from his new position.

After a season occupying left, and following the graduation of Thomas Brittle, Slaton was able to return to his natural position in center field for his junior year, and he has resided there the past two seasons. Slaton was able to learn a lot from the veteran center fielder, who also batted leadoff during his tenure in orange and purple.

“Thomas was definitely a big influence to help me stay positive and stay confident in anything I do,” stated Slaton. “He always told me I was good enough to be there, to just believe in myself and that I would be alright.”

The transition from left field to center was an easy one for Slaton, as he believed he had returned to his roots. In addition to the move back to center, Slaton was inserted into the leadoff role, where he stood out by scoring 46 runs in addition to his dazzling .391 on-base percentage. He drew 42 walks for the season, tied for sixth among ACC players. He also stole 11 bases.

One of his biggest moments as a Tiger occurred in the 2014 ACC Tournament against Miami (Fla.). With the score tied 2-2 heading to the ninth inning, Slaton drew a leadoff walk and came around to score the game-winning, walkoff run after a Steven Wilkerson one-out single.

Following the season, Slaton was the recipient of the Tiger Baseball Award, given to the team’s best leader. He was humbled by the award, especially as a junior. While he does not claim to be a vocal leader, Slaton admits that he strives to be a leader on the field by his hustle, demeanor and strong work ethic.

On a team full of strong candidates, Slaton was named a co-captain at the outset of this season, another testament to his leadership. He was not surprised, but knows what is to be expected of him.

After dedicating the offseason to honing his craft, Slaton has big expectations, not only for his season, but also for the team as a whole. While the Tigers have had their ups and downs during the first half of the season, Slaton knows what his team is capable of accomplishing.

Clemson won two of three games from rival South Carolina to lead into the month of March. While the series win was gratifying, the Tigers do not have time to dwell on past victories.

“It was definitely nice,” explained Slaton. “They have gotten the best of us the past couple of years, so it was nice to take the series, but now that’s behind us, so we need to move forward.”

Anything can happen in a long baseball season, but if the Tigers can remain disciplined, all of their goals can be met with hard work, determination and a positive attitude.

“We need to have energy every day, which is something this team does a good job of and hopefully that will lead to wins,” he said. “I think that energy and being confident in what each individual can offer their team is always big.”

Even though his career as a Tiger is winding down, Slaton plans to finish out his college eligibility on a high note. As long as he takes care of business on the field, everything else will fall into place.

“I want to have a really good year this year,” he said. “I really want to leave a mark on this program and really do something special. That’s where my head is at and where I hope the future goes.”

While the leadoff hitter may not put up the biggest offensive numbers, his sole purpose is to reach base to provide opportunities for his teammates down the lineup, and Slaton has had a successful career reaching base every conceivable way. In addition to being a pesky batter, his strong leadership is evident on the diamond.

The key to a long baseball season is bringing positive energy to every game. That’s exactly what Tyler Slaton does each and every day.