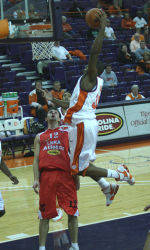 Strong Second Half Leads Clemson to 77-65 over Monmouth

Norfolk, VA – James Mays scored 18 points, all in the second half, to lead Clemson’s men’s basketball team to a 77-65 win over Monmouth in the Cox Communications Classic on Saturday. The final 12-point margin was not indicative of a game that saw 11 lead changes and four ties. Clemson improved to 2-0 with the win, while Monmouth dropped to 0-2 with the loss.

Mays hit 6-11 from the field and 6-10 from the free throw line for his 18-point effort. He added nine rebounds, five steals, four assists, and two blocked shots in an outstanding all-around game. The Tigers had five players reach double figures, including Trevor Booker and Cliff Hammonds with 12 points apiece. Booker shot 6-8 from the field and had four dunks on the night, while Hammonds hit 4-7 from three-point range. Hammonds also took three charges and grabbed three steals. Vernon Hamilton and K.C. Rivers added 10 points apiece.

Clemson shot 49.1 percent from the field and hit 9-20 from three-point range. After the Hawks hit 53.8 percent in the first half, the Tiger defense stiffened and held the Hawks to 40.7 percent shooting in the final period. The Tigers recorded 12 steals and blocked six shots.

Monmouth jumped out to an early 12-5 lead thanks to a pair of three-point baskets and eight points by Dejan Delic. Coming out of the first media timeout, the Hawks scored five straight to extend the lead to 17-5. Raymond Sykes provided an early spark for the Tiger offense, scoring consecutive baskets before a Hamilton three cut the deficit to seven. The undersized Booker provided the highlight of the tournament thus far after elevating over 7’2″ John Bunch with a thunderous slam dunk to cut the score to 22-20.

Clemson took its first lead of the opening half on a three-pointer by Hammonds at 5:38 left. Hamilton began to heat up from the outside after that. The senior point guard from Richmond, VA hit a pair of three-pointers to extend the Tigers’ lead to 36-31. Monmouth went on a 6-0 run to take the lead into halftime. The Tigers committed 10 turnovers in the first half, leading to nine points by the Hawks.

The second half began with back-and-forth action as Mays hit a pair of baskets to give Clemson a one-point edge. But Monmouth came right back with a jumper from Whitney Coleman at the first media timeout. The Hawks held the Tigers without a basket over a four-minute stretch early in the second frame. Monmouth’s run reached 8-0 after Delic scored on a cutting layup.

Clemson cut the deficit to four at 51-47 on a follow dunk by Booker. The game was tied at 51 following four straight points by Mays, including a three-point play off a steal and dunk. The Hawks went up 57-54 after a three-pointer by Delic, but Clemson responded with a 16-3 run to stretch the lead to 10 with 3:37 remaining in the game. Highlighting the run was a steal by the Tigers and a reverse jam off a fast break by Mays.

The Tigers will take on host Old Dominion in the final game of the Cox Communications Classic on Sunday at 4:30 PM.