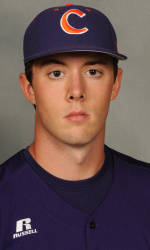 Clemson, SC – Wilson Boyd both had two-out, run-scoring singles late in the game and Doug Kingsmore Stadium on Friday night. The Tigers, who took a 1-0 lead in the series, improved to 8-0, while the Gamecocks dropped to 5-3.

The Gamecocks took a 3-2 lead in the sixth inning on Adrian Morales’ sacrifice fly. But the Tigers scored single runs in the seventh and eighth innings on two-out singles by Stolz and Boyd, respectively, to give the Tigers the one-run win.

Haselden (2-0), a sophomore righthander from Spartanburg, SC, quieted the Gamecock bats after South Carolina totaled eight hits in just over five innings. He allowed no hits, no runs, and one walk with three strikeouts to earn the victory on Friday, which was Head Coach Jack Leggett’s 56th birthday.

Gamecock reliever Michael Roth (0-1) suffered the loss, as he gave up the go-ahead run in 1.0 innings pitched. Starter Blake Cooper struck out seven in 6.2 innings pitched as well.

Chris Epps wasted little time giving the Tigers an early lead when he led off the first inning with an opposite-field home run down the left-field line, his first long ball of the season. Two batters later, Jeff Schaus hit a solo home run to right-center, his second homer of the year.

In the third inning, Whit Merrifield hit a one-out, infield single and went to second on a single to left field by Jackie Bradley, Jr. Two batters later with two outs, Kyle Enders hit a double down the right-field line to score Merrifield and Bradley.

Enders led off the sixth inning with a double to right-center on a 1-2 pitch and Nick Ebert followed with a walk. After Robert Beary’s sacrifice bunt moved the runners up a base, Morales hit a sacrifice fly to right field to score Enders and give the Gamecocks a 3-2 lead.

A clutch two-out hit enabled the Tigers to even the score in the seventh inning. Brad Miller drew a one-out walk, advanced to second on a groundout by John Nester, and scored when Stolz grounded a 2-2 pitch through the left side for a two-out single.

In the eighth inning, Epps led off with a walk and advanced to second on Mike Freeman’s sacrifice bunt. After Epps moved to third on a passed ball, Schaus struck out for out #2 and Kyle Parker was intentionally walked. Boyd came through with a single through the left side to plate Epps, giving the Tigers a 4-3 lead.

The Gamecocks put the potential tying run on base in the ninth inning when Morales drew a one-out walk, but Haselden got pinch-hitter Jeffery Jones to fly out and pinch-hitter Brison Celek struck out looking to end the game.

Clemson and South Carolina will play at Fluor Field in Greenville, SC on Saturday at 2:00 PM. The Tigers will be the designated home team and occupy the first-base dugout.