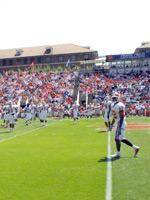 For the second straight year, the Clemson football Spring Game will be played at Historic Riggs Field in Clemson. The game will begin at 1:30 on Saturday, April 5. After the game, fans can then watch the baseball team as it takes on Virginia at 4:00 PM at Doug Kingsmore Stadium.

Game programs will be available for $4 and concessions will also be sold. There will be no surplus sale before this year’s Spring Game.

Saturday morning, April 5, also marks the grand reopening of newly renovated Hardin Hall with ceremonies beginning at 9 AM. There will be a presentation on southern music at 10:30 and one on 19th century southern religion at 11:30, with tours of the building going on all morning. Hardin is the oldest classroom building on campus. It has been a part of the lives of countless alumni. Come join faculty in history and philosophy and see what it looks like now! And on your way up the hill to campus, stop in and see Fort Hill, the Calhoun mansion and the oldest building on campus, which also reopened March 31 after two years of extensive preservation work.