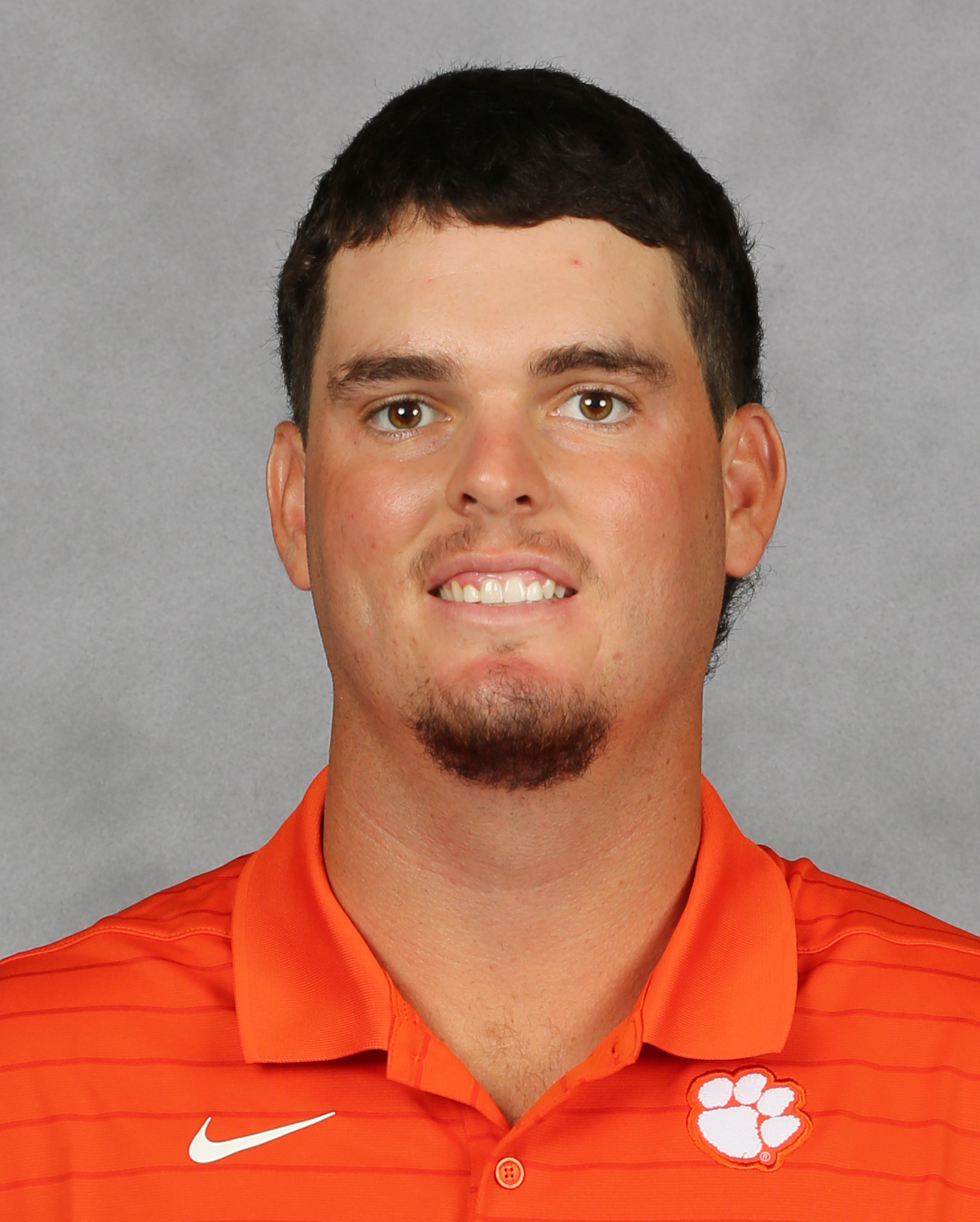 Overview:   Senior who will always be remembered for making the winning putt in his match against Greyson Porter of Florida State that gave Clemson the 2021 ACC Championship in Atlanta…made 20-footer for birdie on 21st hole of the last match on the course…had strong summer of 2021 that included reaching the semifinals of the North-South Amateur at Pinehurst #2…career best finish at a tournament is third place at Birmingham Collegiate in April 2021… has 11 rounds in the 60s in his career…off and on starter over the last three years, all three teams have finished the year ranked in the top 15 in the nation… has played 21 tournaments and 61 rounds in his career…has 72.57 stroke average for those  61 rounds… has three top 10s, 11 rounds in the 60s, 21 rounds under par and 25 at par-or better….shot a career best 63 at the Ka’anapali Classic as a freshman on 11-2-18, the first round of the tournament…had a 65 in the second round at the same tournament as a sophomore and finished fourth while playing as an individual…played in eight tournaments as a rookie, six in the team lineup and two as an individual…had a seventh-place finish at the Puerto Rico Classic… named the National Coaches Association Male Senior High School Golfer of the Year for 2017-18….first golfer from South Carolina to win the award…past winners include Jordan Spieth, Rickie Fowler and Brian Harman…state 5A Golf Champion for 2018 after shooting a 128 for 36 holes….broke previous 5A 36-hole record of 136 that had been set by current PGA Tour player Bill Haas….had rounds of 66-62 to win the state title…shot 30 on the back side when he shot the 62, he had 10 birdies overall in the round…his Gaffney High team won the tournament by 28 shots…qualified for the 2018 US Amateur at Pebble Beach…he was co-medalist at his US Amateur qualifying site.

Summer of 2021:  Reached the semifinals of the North-South Amateur at Pinehurst #2…finished third in the stroke play qualifier with rounds of 65-70 for 135 total…beat William Moll of Vanderbilt, 2&1,  beat Ben Carr of Georgia Southern 2&1, beat Joe Highsmith of national champion Pepperdine,  2&1…eliminated in final four by Louis Dobbelaar, 3&11….finished 15th at the Palmetto with 282 total, he had an opening round 66 and final round 69 to highlight his performance…finished the summer with third place at the Southeast Amateur with a 10-under 200 score…had rounds of 63-67-70.

In 2020-21:   Made winning putt in ACC Match Play championship over Greyson Porter of Florida State that gave Clemson the league title in Larry Penley’s final year…fifth on he team in stroke average with 72.86 figure…named to Academic All-ACC team…named to Academic Scholars team by Golf Coaches Association…in the Clemson lineup for four of the nine tournaments, he played in three others as an individual…starter in the ACC Tournament and the NCAA Regional among his four appearances in the Clemson lineup…so, while William Nottingham is considered the starter in the lineup for this season, Gordon started two of the three postseason events…capable of going low, he had five rounds in the 60s and seven under-par rounds among those 21 rounds…finished 13th as an individual at the Kiawah Invitational with a 211 score, five-under-par…had career high 18 birdies at that tournament…went into the starting lineup for the Palmetto when Turk Pettit was qualifying for the Canadian Tour…finished 26th, he had second round 68 that tied for his low round of he year…finished third at Birmingham for his best career finish…second among Clemson players at that tournament…had rounds of 72-68-71 for 211 score…that performance moved him into the lineup for ACC tournament…finished 43rd at ACC, but had strong final round 71…lost 1-up to Steinlechner of NC State in semifinals, then had the big win over Porter of Florida State in finals…in the lineup for NCAA Kingston Regional…had  69 in second round of the regional that tied Turk Pettit for Clemson low round of the day…finished the year with 68 birdies….his score counted in 7 of 12 rounds he was in the lineup…had 73.29 stroke average in opening rounds and 73.86 in final rounds…had 3.15 average on par threes, 4.08 on par fours and 4.94 on par fives.

2019-20:  Finished season with a 71.83 stroke average…had four rounds in the 60s and six under-par rounds among his 18 rounds for the year…shot 75 or better in 17 of the 18 rounds …his 201 for 54 holes at Ka’anapali Classic was second best of the fall by any Tiger…had 63 birdies and four eagles for the year…eagle total was team best…played in four stroke-play tournaments in the fall, all as an individual….finished strong 18th at the Maui Jim in September …finished 32nd at Golf Club of Georgia with a 220 score, including solid 71 in the final round….finished fourth individually with 201 score, 12-under par, at the Ka’anapali Classic….one of the top 10 low 54-hole scores in Clemson history….posted rounds of 67-65-69 at that tournament…did not compete for the Clemson team, but his fourth-place finish was 21 places better than any other Tiger…showed his ability in match play at the Jack Nicklaus Match Player where he helped tigers to the team title. …Gordon and Turk Pettit were only Tigers to post a perfect 3-0-0 record….Gordon and Pettit won two matches against Ohio State then both won singles matches against Duke…Gordon defeated Steven DiLisio of Duke in singles….finished solid 32nd at Puerto Rico Classic and 13th at the Palmetto…shot 213 at the Palmetto…had 71.50 stroke average in opening rounds.

In 2018-19:  Had 63 in the opening round of the Ka’anapali Classic, tied for the second best round in Clemson history…had seven birdies and an eagle in that round…just the sixth player in Clemson history to shoot 63 or better…shot a six-under-par 31 on the front nine, he had just one bogey in the round….in the lineup for Clemson in the first tournament of the year at Carpet Classic, he finished 53rd…picked up experience at Hummingbird as an individual, he finished tied for 12th with three-under-par 210 score….had consistent rounds of 69-71-70…in the lineup at Golf Club of Georgia where he helped Clemson to a second-place finish against a strong national field…shot one-over-par 217 to finish 29th…finished 15th at the Ka’anapali Classic…finished at 206, seven-under-par…began the spring with his best finish of the year, seventh-place at the Puerto Rico Classic…had three under-par rounds in Puerto Rico, 70-71-71…played one round in the ACC Tournament, then traveled to the NCAA National Tournament, but did not play.

Prior to Clemson:  In addition to winning the medalist honors at the 5A South Carolina state tournament, he led Gaffney to the 2018 team title…won the Carolinas Golf Association Boys Match Play Championship in 2018…also finished second at The Blade, second at the Southern Cross and second at the Beth Daniel Junior Azalea…had a final round 65 at the 2017 SCGA Amateur to finish fourth….that was the low round of the day by four shots….won the 2016 Carolinas Junior PGA Championship in Conway, SC when he had consecutive rounds of 68. ….made a hole-in-one at the 2016 Junior PGA in Rhode Island, it was on the 210-yard 12th hole at Wannamoisett Country Club… also won the 2015 and 2016 Harvey Brock Orange Jacket Junior Tournament….finished third at the 5A State Championship as a junior…. first-team All-State in 2018…..did not begin playing the sport until he was 13 when he began by playing putt-putt… coached in high school by Brandin Coggins. 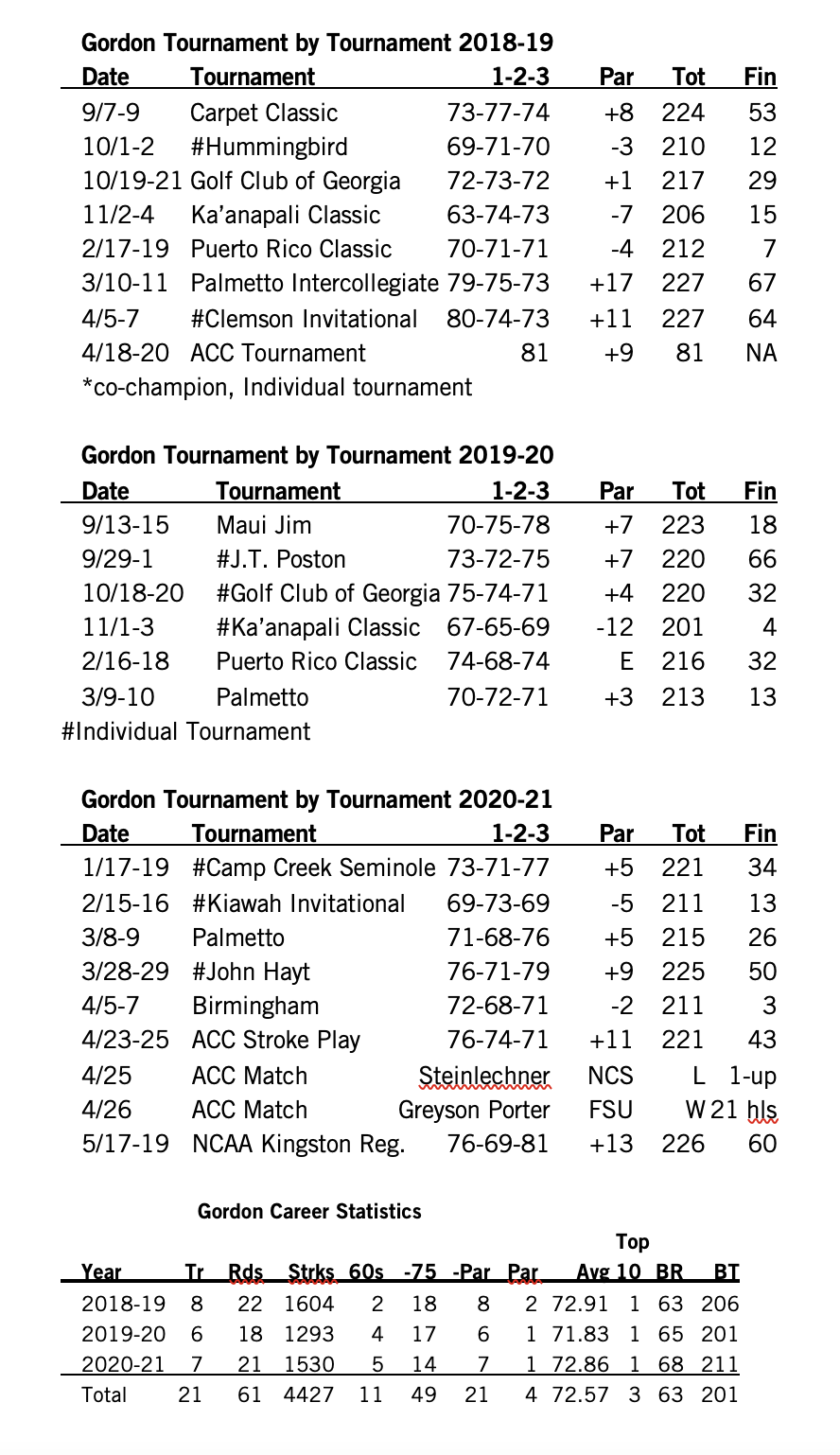