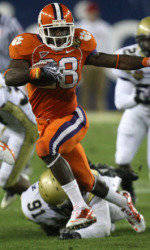 CLEMSON, SC – Clemson running back and kick returner Banks McFadden Award as the top college football player in the state of South Carolina on Feb. 15, 2010. The award is presented each year by the Greenville Touchdown Club and is named in honor of former Clemson All-American Banks McFadden.

Spiller will receive the honor at the Greenville Touchdown Club Awards Banquet on Monday, February 15 at the Brookwood Community Church in Greenville. Clemson Head Coach Dabo Swinney will be the featured speaker at the event that begins at 7:00 PM.

Spiller is the eighth Clemson player to win the award, the first since Cullen Harper in 2007. Anthony Simmons won the award twice as a linebacker, 1996 and 1997.

A finalist for the Doak Walker Award, Spiller had 233 yards rushing in 20 attempts and scored a career high four touchdowns in the ACC Championship game against Georgia Tech on December 5. He now has 1,145 rushing yards this year and 445 receiving yards. He has 50 career touchdowns and needs just one in the Music City Bowl against Kentucky to become Clemson’s career leader. He finished sixth in the voting for the Heisman Trophy, the highest finish for an ACC player since 2000 and tied for the highest finish by a Clemson player.

This year he has accounted for a touchdown five different ways, 11 rushing, four receiving, four on kickoff returns, one on a punt return and one by throwing a touchdown pass. He has already established an NCAA record for kickoff returns for touchdowns in a career with seven. He has 7416 all-purpose yards for his career, third best in NCAA history. This season he has 2508 all-purpose yards, an ACC record.

Spiller, who graduated from Clemson on December 17 with a degree in sociology, has 21 career touchdowns of 50 yards or more, including nine this year.