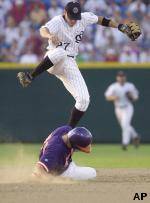 Omaha, NE – South Carolina scored five runs in the sixth inning to take a lead it would not relinquish in a 12-4 victory over Clemson on Wednesday night at Rosenblatt Stadium in Omaha, NE. Matt Campbell (4-2) pitched 5.1 innings of two-hit relief to cool off the hot Tiger bats. The two squads will square off in a College World Series elimination game on Friday at 2:00 PM EDT. The game will be televised by ESPN2.

Zane Green led off the game by driving USC starter Blake Taylor’s first pitch deep to left center. The ball landed over the wall for a home run, Green’s sixth home run of the season and school-record sixth of the NCAA Tournament. It was also the second time in the 2002 postseason that the sophomore homered on the first pitch of the game.

The Tigers added to the lead in the third inning when Michael Johnson blasted his 25th home run of the year to right center field, a two-run shot that pushed the advantage to 3-0. The long ball was the team’s 112th of the year, breaking the school record set in 1991. South Carolina got on the board in the bottom of the frame with two runs. Garris Gonce led off the inning with a double and was followed by Drew Meyer’s two-out double and Justin Harris’ RBI-single up the middle.

Clemson answered in the top of the fourth with Roberto Valiente’s two-out single to center, his third hit of the game. The Tigers then loaded the bases with two outs for the third time in the game and for the third time failed to score a run as Kyle Frank struck out to end the inning. In the bottom of the fourth, Trey Dyson lifted a high fly ball to left field that caught a blustering wind and just clear the fence in left. The two-run shot tied the game at four.

Khalil Greene led off the sixth inning with the 94th double of his career, tying the NCAA record set by Mark Sandiford of Wichita State. After a groundout by Jeff Baker, Johnson was intentionally walked for the second time in the game. Clemson came away with no runs after Valiente grounded into a 6-4-3 double play.

South Carolina took its first lead in the bottom of the frame when Steve Thomas hit a solo home run to left field. The shot knocked starter Steve Reba out of the game, but reliever Thomas Boozer gave up two runs. Dyson homered for the second time in two innings and the two-run blast gave the Gamecocks a 7-4 lead. Kevin Melillo and Harris added RBI-singles to cap the five-run inning and put South Carolina ahead 9-4.

The Gamecocks added three runs in the eighth to make the final margin 12-4. Reba (13-4) got the loss for Clemson, who was led at the plate by Valiente’s 3-5 performance. The Tigers went 1-7 with runners in scoring position and 0-4 with the bases loaded.