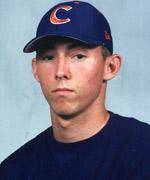 South Carolina scored three runs in the eighth inning after a costly throwing error and held on for a 6-5 victory over Clemson in front of 5,887 fans at Sarge Frye Field on Sunday. The Tigers (5-7) took a 5-3 lead in the seventh inning, but the #4 Gamecocks (15-1) capitalized on two Tiger miscues to defeat Clemson for the second-straight day.

The comeback spoiled Kris Harvey’s outstanding effort on the mound. The junior from Catawba, NC allowed just four hits and two earned runs in a career-high-tying 7.0 innings. Reliever Drew Fiorenza (1-1) suffered the loss. South Carolina starter Zac McCamie scattered eight hits and two runs while striking out six against only one walk, but did not factor in the decision. Andrew Cruse (3-0) earned the win, as he pitched 2.1 scoreless innings. Brent Marsh also picked up his fourth save of the year by retiring the only batter he faced.

Clemson outhit the Gamecocks 13-7 and was led by Tyler Colvin’s game-high three hits. Herman Demmink, Taylor Harbin, and Travis Storrer all had two hits apiece. Harbin, a freshman, has had at least one hit in 11 of the first 12 games and at least one extra base hit in 10 games. Steve Pearce and Michael Campbell combined for four of the Gamecocks’ seven hits.

South Carolina took a 2-0 lead in the first inning. Steven Tolleson reached on a throwing error by shortstop Stan Widmann. After Chris Brown flew out, Pearce lined a two-run homer to left-center, his fourth of the season. Pearce came through after going 0-for-4 with three strikeouts at Clemson on Saturday.

Clemson cut the lead in half in the second inning. Colvin led off with an infield single off the glove of McCamie and went to third on Andy D’Alessio’s single to left-center, his first of the season. Widmann grounded into a double play, but Colvin scored on the play.

Harbin tied the score in the third inning when he hit a solo home run to left field. It was the Travelers Rest, SC native’s first home run as a Tiger.

South Carolina retook the lead in the bottom of the third. Pearce led off with a sharp double that went between the legs of Demmink at third base and advanced to third on a wild pitch. He then came across on Jon Willard’s towering sacrifice fly to right field.

After going 0-for-5 with runners in scoring position in the first sixth innings, Clemson finally came through in the clutch in the seventh inning to take the lead. Demmink and Harbin both hit one-out, two-strike singles to put runners at first and second. Storrer then laced an opposite-field double that was just out of the reach of left-fielder Davy Gregg that scored two runs. After Harvey grounded out for out #2, Colvin lofted a soft single to center to plate Storrer, giving the Tigers a 5-3 lead.

The Gamecocks rallied in the eighth inning and took advantage of a costly error by freshman pitcher David Kopp. Tommy King led off with a walk and Pearce then flied out to center. Pinch-hitter Ryan Mahoney hit a high chopper to the first-base side of the mound. Kopp’s 40-foot throw was up the line and went deep into foul territory, allowing King to score all the way from first base, while Mahoney advanced to third. Campbell then tripled down the right-field line to plate pinch-runner Mark Stanley. Brendan Winn then hit a high fly ball to right-center. Centerfielder Jesse Ferguson and Storrer (RF) miscommunicated and the ball fell in between them, allowing Campbell to score to give the Gamecocks the lead, although Campbell most likely would have scored on a sacrifice fly if the ball was caught. Neil Giesler followed with a single through the right side, but Winn was thrown out at the plate by Storrer, his second outfield assist in the last three games. Fiorenza struck out Cory Vanderhook to avoid further runs, but the damage was done.

Clemson mounted a rally in the ninth inning, but came up short. Demmink lined a one-out single to center and went to second on a wild pitch. He advanced to third on Harbin’s groundout, and in came Marsh. Harvey hit a ball off the end of his bat to shallow left field that looked like it might fall, but Gregg made the running catch for the game’s final out.

Clemson will play host to Furman on Wednesday at 7:15 PM.