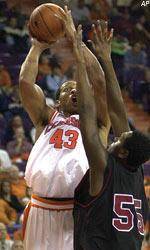 It’s the Gamecocks’ fourth straight win in the series as South Carolina (8-0) continues its best start since 1971. The Gamecocks’ s smaller, quicker lineup had 17 steals and neutralized Clemson’s interior game for the most part.

The Tigers’ starting frontcourt – Chris Hobbs, Olu Babalola and Sharrod Ford – did combine for 32 of Clemson’s 61 points, but they disappeared during important stretches.

Clemson took its last lead of the game at 44-43 on an Akin Akingbala dunk with about 11˝ minutes to go.

South Carolina then went on a 20-6 run over the next seven minutes to put the game out of reach, scoring on seven straight possessions at one point and taking a 63-50 lead.

The Tigers would close to 63-54 with three minutes to go, but Powell got open for an easy layup as Clemson tried to turn up the pressure. The Tigers never got any closer.

Powell scored 14 of his 23 points in the second half including 10 in the decisive run.

Clemson hit just three field goals in the final nine minutes and two of those came with the game well out of hand.

South Carolina’s Michael Boynton, who has not lost to the Tigers in his career, hit six free throws down the stretch as the Gamecocks made 11 of their last 12 foul shots.

Hobbs, who lost his fourth game against South Carolina in his career, led Clemson with 13 points. Babalola had 11 points and 11 boards and Shawan Robinson also scored 11 for the Tigers.

The first half was a streaky affair, filled with turnovers. South Carolina forced 15 Clemson turnovers, including 13 steals. But the Gamecocks gave the ball away 11 times.

Each team played well for a little while. The Gamecocks’ run came first, outscoring the Tigers 19-10 in the middle of the half to take a 24-21 lead with about 7˝ minutes to go.

But South Carolina managed just one field goal and four free throws the rest of the way as Clemson ended the half on a 12-6 run of its own to take a 33-30 lead at the break.

Gamecock coach Dave Odom has now won nine straight over the Tigers including six at Wake Forest. This was Clemson coach Oliver Purnell’s debut in the rivalry.

While games in any sport in this rivalry are bitter, football is still king. Several students had signs reminding everyone South Carolina suffered its worst defeat ever in the series last month, including one that read: “63-17 Enuff Said.”

And the first standing ovation of the night came at halftime when football coach Tommy Bowden emerged from the tunnel and walked to midcourt to accept a trophy for his team’s win over the Gamecocks.