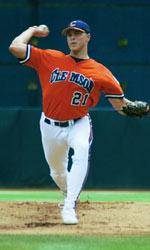 COLUMBIA, SC – Matt Henrie kept the Gamecock offense at bay while the Clemson offense used small ball to take a 4-1 victory over South Carolina Wednesday night before a record-crowd of 6,811 fans at Sarge Frye Field. Clemson improved to 36-5 while dropping South Carolina to 31-10. The win gave the Tigers three of the four games against South Carolina in 2002. Jack Leggett moved to 10-5 against the Gamecocks in Columbia and now has 100 wins over top-25 opponents.

Starter Matt Henrie (9-1) led the way for Clemson in a solid outing. He shut down the South Carolina bats for the first six innings and ended the game after throwing 107 pitches over seven innings. He allowed only six hits and one run while striking out seven and walking one. Patrick Hogan earned his second save of the season by pitching two scoreless innings. Steve Boundrant (5-2) picked up the loss for the Gamecocks.

South Carolina threatened with two outs in the second inning after Justin Harris’ dribbler was picked up by catcher Collin Mahoney and thrown errantly into right field, allowing Harris to advance to third. But Henrie struck out next batter Landon Powell on a pitch in the dirt and Mahoney made a successful throw to first for the putout.

The first two Tiger batters reached in the third and Roberto Valiente’s sacrifice bunt moved the runners to second and third. Kyle Frank followed with a sacrifice fly to center that scored David Slevin and gave Clemson a 1-0 lead.

Henrie got out of another jam in the fourth when he induced an inning-ending 6-4-3 double play. In the top of the fifth, Clemson put together a two-out rally. Slevin reached on an infield hit and Valiente followed with a single through the left side two batters later. Frank, who extended his hitting streak to 13 games in the first inning, then roped a line drive double to right field that drove in two runs and put the Tigers ahead 3-0.

The Gamecocks finally got to Henrie in the seventh. Kevin Melillo’s two-out single put runners at first and second and Drew Meyer followed with an RBI single to put South Carolina on the board. Steve Thomas then ran the count to 3-1 on Henrie before hitting a line drive that was snagged out of the air by Khalil Greene.

Confusion struck in the top of the eighth. After Clemson loaded the bases with none out, Schmidt sent a fly ball into short center that centerfielder Harris stretched for. Umpire Henry Stancil ruled Harris did not make the catch, allowing Frank to score.

Greene and Russell Triplett struck out two batters later and the Gamecocks escaped with only one run given up.

Frank went 3-3 with all three Clemson RBIs to lead the offense, while Slevin added two hits while scoring two runs. Johnson claimed the Bob Bradley Award as the best Clemson player for the four-game series against South Carolina. Yaron Peters won the Tom Price Award as South Carolina’s best player for the series.

The Tigers will next play host to third-ranked Wake Forest for a three-game set this weekend. First pitch for Friday is scheduled for 7:15 PM.