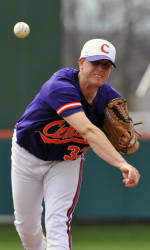 Scott Weismann and Doug Kingsmore Stadium on Friday night. The Tigers, who took a 2-0 series lead, improved to 36-19 overall and 17-12 in the ACC. The Seminoles, who lost back-to-back games for just the third time all season, fell to 39-15 overall and 18-11.

The Tigers took the game’s first lead with six runs on five hits and three walks in the third inning. John Nester led off with a walk and Brad Miller reached on a bunt single to load the bases with no outs. Two batters later, Jeff Schaus walked to plate Nester, then Kyle Parker grounded a single through the right side to score Stolz and Miller. After John Hinson reloaded the bases with a single through the left side, Richie Shaffer belted a double to left-center to score Schaus, Parker, and Hinson.

In the fourth inning, the Seminoles responded with two runs. Tyler Holt worked a leadoff walk and Sherman Johnson laced a ball to second-baseman Mike Freeman. Freeman leaped, got a glove on the ball, and would have been able to double Holt off first as he was moving towards second base, but the ball popped out of Freeman’s glove and Johnson reached on the single. Two batters later, James Ramsey lined a double to right field to score Holt, then Sean Gilmartin lofted a sacrifice fly to right-center to score Johnson.

Shaffer reached with one out in the fifth inning on an infield single and Wilson Boyd belted a two-run homer to center, his fifth long ball of the season, to give the Tigers an 8-2 lead. It also extended Clemson’s home run streak to 11 games.

Ramsey led off the seventh inning with a solo homer to right field, his eighth long ball of the season.

In the ninth inning, Gilmartin hit a one-out double over the third-base bag and scored on Justin Gonzalez’s double to right field. But Haselden retired the next two Seminoles to close out the game.

Shaffer went 3-for-4 with a double, three RBIs, and a run to pace Clemson, who outhit Florida State 11-5. Boyd went 2-for-3 with a homer, two RBIs, and a walk, while Stolz added two hits and a run.

Ramsey went 2-for-3 with a homer, double, two RBIs, and a walk to lead the Seminoles.

The win marked Jack Leggett’s 200th over a top-25 ranked team in his 17 years as Clemson’s head coach.

Clemson and Florida State will conclude the series and the regular season on Saturday at 1:00 PM. The winner of Saturday’s game will earn the #2 seed and the loser will be the #5 seed in the ACC Tournament. The game will be televised live by Regional Sports Network and has been selected ACC Baseball’s TV Game of the Week.