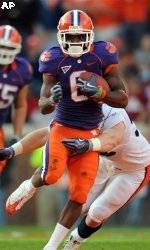 Clemson, SC-Jacoby Ford posted the fastest time 40-yard dash time of all players at the NFL Combine over the last four days, while former teammate C.J. Spiller had the fourth best overall time according to data released by the NFL on Tuesday afternoon.

Ford ran a 4.28 in the 40 on Sunday, best among all players at the combine and tied for the second fastest by any player since 2000, the first year the NFL kept such records. It tied for the fastest ever by a wide receiver at the NFL Combine. Ford also had a time of 11.58 in the 60-yard shuttle run, fifth best among the wide receivers.

Former Clemson All-American Spiller ran a time of 4.37, fourth best among all players and second best among running backs. Only Jahvid Best of California had a faster time among running backs with a 4.35 figure. Spiller is the highest rated running back for the 2010 NFL draft by most experts and should be a top 15 overall pick.

The NFL draft will be held in New York City, Thursday, April 22 through Saturday, April 24.