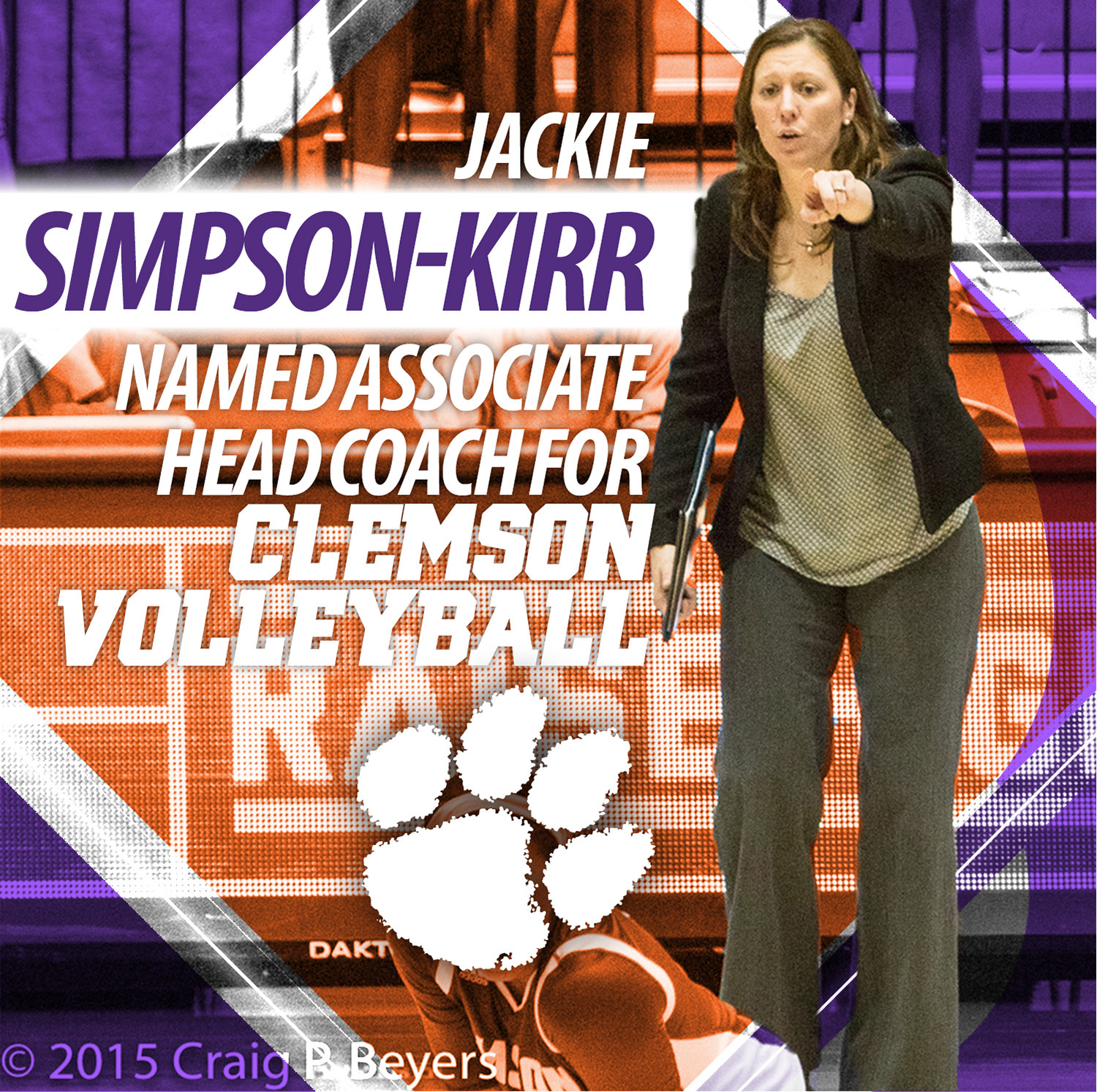 CLEMSON, S.C. – Jackie Simpson-Kirr has joined the Clemson volleyball staff as associate head coach, and will serve as the team’s offensive coordinator and recruiting coordinator. Head Coach Michaela Franklin made the announcement on Monday.

“I am thrilled to have Jackie and her family join us at Clemson,” said Franklin. “I’ve had the pleasure of working with Jackie before, and what I enjoyed and appreciated most about her is that she has an intense work ethic, a passion for success and a creative mind that thinks outside the box.

“Jackie comes with elite level coaching and playing experience. Being an All-American setter in the B1G, I am counting on her to work with our setters and be our offensive coordinator.

“Most recently, Jackie was a head coach, and during that time I have seen her evolve as a recruiter. She has recruited on a national level and most recently has developed her international recruiting connections. I believe Clemson presents her with the opportunity to develop into one of the best recruiting coordinators in the country.”

Simpson-Kirr spent the past two years as the head coach at George Mason in Fairfax, Va. In 2015, her first season with the Patriots, she led the team to the best Atlantic-10 finish in program history and its best overall record since 2010. While at the helm of the Patriot program, Simpson-Kirr served on the AVCA All-American Selection Committee in 2016, during which time she was the East Region Committee Chair. She also earned the AVCA’s 30-under-30 Award in 2015, a prestigious national honor awarded to the top 30 volleyball coaches, at any level, under the age of 30.

“I am humbled and honored to become a part of the Clemson Volleyball Family,” said Simpson-Kirr. “There is a special energy when you walk through the Clemson campus. It is one of the most beautiful campuses I have seen, but I could tell from my initial interactions that the people are what makes it exceptional.

“I am beyond excited to work with Michaela again. I believe she is one of the best leaders in our sport. Her vision for a program built upon championship behaviors is inspiring and I can’t wait to get started helping make that vision a reality.”

Simpson-Kirr was a standout setter at Wisconsin from 2004-07. She led the Badgers to four NCAA Tournament appearances, including two Elite Eight berths. She was a two-time AVCA All-American, and also a two-time All-Big Ten selection, both on the court and in the classroom. She ranks second all-time in Wisconsin program history in career assists, and is 17th all-time among Big Ten setters.

Simpson-Kirr earned a Bachelor of Science degree in Letters & Science – Sociology from the University of Wisconsin-Madison in 2008. She earned a Master’s degree in Exercise & Sport Science – Sport Psychology from East Carolina in 2013.