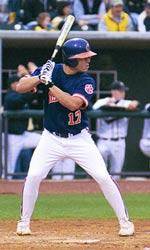 In game two of the doubleheader, #10 Clemson scored seven runs in the ninth inning to down #16 N.C. State 12-10 Saturday at Grainger Stadium in Kinston, NC. Clemson salvaged the series with the come-from-behind win. Clemson improved to 19-6, 1-2 in ACC play. The Wolfpack fell to 23-7, 4-2 in conference action. It was Clemson’s second ninth-inning comeback on the road this season, as the Tigers rallied to win at College of Charleston on March 18.

Tiger freshman Pat Clayton (1-0) earned his first career victory in relief. Paul Harrelson earned his third save of the year as well. Chad Orvella (0-1), who allowed all seven runs in the ninth inning, suffered the loss. In three appearances this season, he had allowed just one hit, no runs, and no walks while striking out six in 3.2 innings pitched.

Clemson took its first lead of the series in the first inning. Triplett hit a one-out single. After Kyle Frank’s slow grounder to first base brought home Triplett to put the Tigers ahead 1-0.

N.C. State responded in the bottom of the first inning. Marc Maynor reached on a fielding error by Triplett and scored on Jeremy Dutton’s double to centerfield. Joe Gaetti then walked as Dutton was stealing on the play. Catcher Collin Mahoney’s errant throw allowed Dutton to score. After Orvella drew a bases-loaded walk, Matt Camp drove home Morton on a sacrifice fly to left. The four runs scored in the first inning came off only one hit.

Clemson came right back with two runs in the second inning. Collin Mahoney’s beat out an infield single, Demmink lined a double to deep center, and Slevin hit a 2-2 pitch to left-center to bring home two runs. Clemson had runners at first and third with one out, but Johnson struck out and McCann grounded out to third to end the inning.

Collin Mahoney’s RBI groundout in the third inning tied the score 4-4. The RBI scored Frank, who walked, advanced to second on a passed ball, and advanced to third on Jeff Hourigan’s groundout. The Tigers had many more chances to score in the first three innings, however they left six runners on base, five of which were in scoring position.

N.C. State made the Tigers pay in the fourth inning. Adam Hargrave and Maynor had one-out, “seeing-eye” singles to put runners on first and second. Dutton continued his torrid hitting with a double to right-center to plate two runs. Dutton was 6-for-10 with two homers, two doubles, and 10 RBIs in the series. Tiger pitchers then walked three straight batters, the last of which plated Dutton. Reliever Robert Rohrbaugh then struck out David Hicks, but the wild pitch on the play allowed Gaetti to score. With the bases loaded, Rohrbaugh battled back to strike out Camp looking to end the threat.

Clemson cut into the lead in the seventh inning. Triplett led off the inning being hit by a pitch and scored two batters later on McCann’s double to left-center, his 12th of the year. But McCann’s was stranded when Frank and Hourigan grounded out, ending the inning.

The next inning, Clemson threatened once again. Demmink and Slevin hit one-out singles, but Hub flied out and Triplett struck out looking to end the inning. The Tigers were 2-for-29 (.069) with two outs and 5-for-34 (.147) with runners in scoring in the series entering the ninth inning of game three.

That slump ended in the ninth inning. Johnson led off with a walk and advanced to second on a single through the right side by McCann with no outs. After Frank struck out, Hourigan hit a long home run to left field on a 1-2 pitch to tie the score 8-8. It was the Beacon Falls, CT native’s second homer of the year, as he was 0-for-4 before the at bat. Mahoney then lined a double to the left-field gap. Demmink lined his third hit of the game, a double to left, to score pinch-runner Zane Green. Slevin followed with his fourth hit of the game, a line-drive single to center to plate Demmink. Then Johnson blooped a double down the left-field line to score two more runs and give the Tigers a 12-8 lead. Johnson’s two-run double proved to be the difference in the game. Johnson had just one hit in the series before the insurance hit. In the ninth inning, Clemson was 5-for-8 with runners in scoring position after totaling just five hits with runners in scoring position in the entire series prior to the ninth inning.

N.C. State loaded the bases in the ninth inning with Gaetti to bat, facing reliever Harrelson. Gaetti, who homered in his first at bat of the series, lined a two-run single to right-center to bring the Wolfpack within 12-10. But Harrelson struck out Morton on an 0-2 breaking ball out of the zone to end the game.

Clemson will next play host to Western Carolina Tuesday at 7:15 PM at Doug Kingsmore Stadium.